Don't Look In The Mirror!

The creator of the No Signal horror cliché montage from last year is back with another video. This time FourFour has strung together a compilation of the ubiquitous 'mirror scare'.

I might cut Kiefer some slack, as I doubt a movie actually CALLED Mirrors could get away without using a least one mirror gag. For a breakdown list of the films appearing above, click here to visit the FourFour blog.

A new trailer for the upcoming retro-giallo Amer arrived on the Web last week.

You can see that this French/Belgian production directed by Hélène Cattet and Bruno Forzani is just soaked in the atmosphere of the Italian thrillers from the seventies and eighties. Amer is playing SXSW in March, so I have my fingers crossed that it makes its way north soon.

Recently, there has been a wave of great interviews with women in horror and I've been loving every one of them. Here are just a few.

The fantastic content of Killerfilm's Late Night Classics continues with a great interview with Scream Queen Brinke Stevens, who appeared in countless horror films, including Slumber Party Massacre, Soul Survivor and Nightmare Sisters. Jason Bene talks to her about how she got into the business, working with fellow Scream Queens Linnea Quigley & Michelle Bauer and her experiences on the set of Sorority Babes in the Slimeball Bowl-A-Rama. Click here to check out the interview. 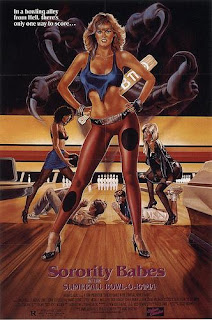 Icons Of Fright - which is a site I look in on every once in a while since they broke the story about the Let The Right One In subtitling snafu a year ago - recently posted an audio interview with Kathleen Kinmont. Kinmont has always been one of my faves, after her memorable roles in such horror films as Halloween 4 (Cops Do It By The Book!) and Bride of Re-Animator. The interviewer speaks to her at length by phone about her roles in the two aforementioned films, meeting her fans at conventions and also her work on the cult nineties TV show Renegade. Click here for the link to download the mp3.

Lastly, as part of their Women In Horror series, Sarah Jahier of Fatally Yours posted this awesome interview with horror maven Axelle Caroyln. She wears many hats within the industry, among which are writer - her book It Lives Again! Horror Movies in the New Millennium is available through Amazon - and actress, most recently as a Pict warrior in her husband director Neil Marshall's new film Centurion. Here's just a snip.

Fatally Yours: What made you fall in love with the horror genre?

Axelle Carolyn: Ever since I was little I’ve always been attracted by the darker side of things, ghosts and skeletons and haunted mansions and spooky stories. But I think what really made me fall in love with the genre was discovering my dad’s collection of horror books when I was about 7 or 8. He had several books of ghost stories by Belgian writer Jean Ray, and also Dracula, Frankenstein… the classics. A few years later I read my first Stephen King novel, and I was hooked for life.

Fatally Yours: What does horror mean to you?

Axelle Carolyn: Anything supernatural or scary, anything that takes you away from reality. What the French call “fantastique”… Perhaps the reason there aren’t quite as many female horror fans is that the genre is too often confined to gore and cheap scares.

I'm in love with this woman. *Ahem* Did I type that out loud? Anyway, click here for the rest of the interview.
Posted by Jay Clarke at 11:32 AM

Great Mirror clips. Most of them were familiar to me. I have to say though that I am a little freaked out now. I just finished reading a thriller titled, "They Never Die Quietly" by D. M. Annechino... which I have to say scared me to death- it definitely is not for the faint of heart. Within 10 minutes of finishing the book I stumbled across your site... All I can say is that I won't be looking in the mirror tonight! :)