Okay, let's get back on track here, I have such sights to show you.

I found a cool little YouTube project this week called Editing The Dead. Because of George A. Romero's classic Night of the Living Dead still being in the realm of public domain, an entity by the name of Werkbund, decided to re-work the footage in the form of a Choose Your Own Adventure. Sure, it becomes more linear the farther in you get, but it's an awesome way to spend a few minutes. Check out the link below to give it a whirl.

A friend of mine just told me about this amazing DVD set that released in the UK a few weeks ago. It's called Video Nasties: The Definitive Guide and boy is it a beauty. 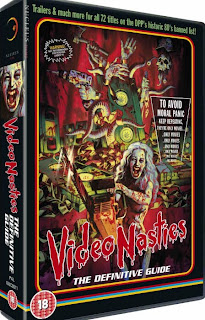 It includes a new documentary by Jake West about the history of the Video Nasties, trailers for ALL of the seventy-two titles that appeared on that fateful list and tons of other goodies. There's over 13 HOURS of material spread over three discs! This is the kind of moral depravity this blog was built on! I hope to have this in my hands very soon, but I think the best way to demonstrate the awesomeness is to show you the trailer that had me drooling.

Almost three years ago now, I first heard about a little movie called John Lechago's Bio-Slime. It seems that every once and a while, new info surfaces on it and then it disappears again. Just release the damn thing already!!! Here's the latest trailer for the newly renamed Contagion.

Around Halloween, Jon Watts & Christopher D. Ford made a faux trailer for a project they were writing called Clown, about a man who dons a clown costume for his kid's party, with sinister results. They inserted "from Master of Horror Eli Roth" into the trailer as a joke and it blew up online. Well, it looks like Roth liked what he saw and has now come on as producer. After this, and Jason Eisner's famous Grindhouse trailer Hobo With A Shotgun, making a faux trailer is becoming a legitimate way to get noticed. Good job, guys. Here below, is the Clown trailer that started it all.

Now if you'll indulge me for a moment, I'm going to pimp my own wares. I mentioned a while back that I worked on a film shot locally by some friends of mine. Well, it is finally in the can and ready to be unleashed. Here below is the first trailer for Android Re-Enactment. For more info, you can go to the official blog or Facebook page.

Lastly, I just wanted to throw up a cool pic from director James Gunn's Twitter Feed. He had the poster artwork from the Dawn of the Dead remake (which Gunn himself wrote) put on his Roomba vacuum robot. 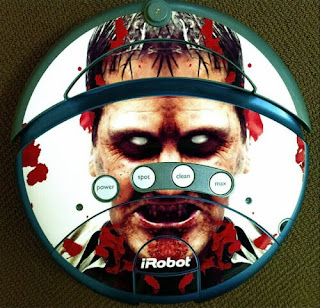 Watch your feet!
Posted by Jay Clarke at 7:59 AM

That DVD cover for VIDEO NASTIES is awesome.