Nightmares On The Wall.

A fixture on my bedroom walls as a kid was Freddy. From about the age of twelve on, there would always be multiple visages of everyone's favourite burn-scarred child murderer awaiting anyone who dared to set foot in my humble abode. So, seeing as today is the twenty-sixth anniversary of the release of the first A Nightmare On Elm Street - and I need to continue posting my collection - here are the posters that are still in one piece. 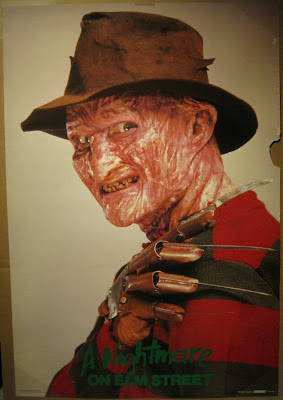 I assume that one spent sometime on my door, judging from the notch cut into it to accomodate a doorknob. 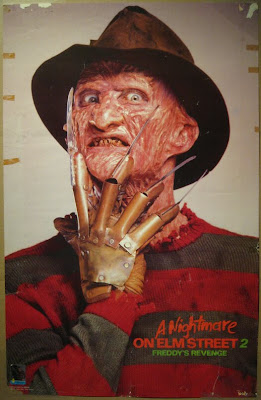 I believe that was my first Freddy poster, which explains why it's the one with the most amount of wear. 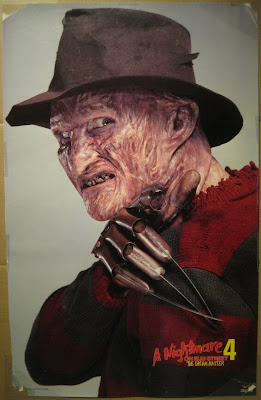 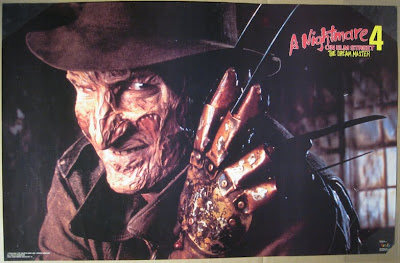 I think Part 4 came out at the apex of my Freddy fandom, so that's the movie I have the most stuff from.

I did have a six-foot tall Freddy poster, but it seems to have irritatingly disappeared in the move to this location. I'll insert it later if it ever resurfaces. 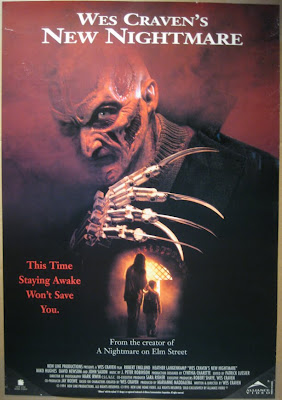 I dig this poster a lot. Save for the original design below, it is probably my favourite. 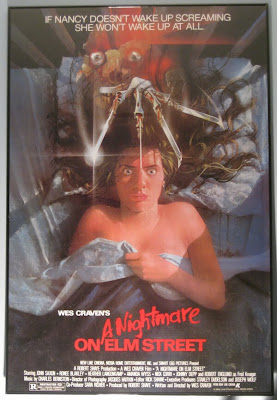 Ah, the one that started it all. This one currently adorns the wall space above my DVD/Blu-ray shelves. It is the far left in a row of several other classics, but that is for a future installment.

I adore the art in that poster, I sometimes just find myself staring at it and admiring all the little details. And even after all that, I still didn't notice the little "Snakeman" put in there by artist Matthew Peak (just above Freddy's pinky) as a nod to said character in the sci-fi Dreamscape that came out earlier that same year. That was just one of a large amount of nuggets that was revealed to me while watching the quintessential Nightmare doc Never Sleep Again a few months ago.

So, that's it for now. I also did a bit on the Nightmare films for last year's anniversary - the more milestone-ly twenty-fifth - so if you want to check out some more of my memorabilia, you can click here.
Posted by Jay Clarke at 8:00 AM

Sweet! I had two door sized Freddy posters about ten years ago. Damn cat ripped up the bottoms of em...