Quite some time has gone by since I sounded off on the horror video game titles that have been eating up my leisure hours, so here's a rundown.

Blue Castle Games' Dead Rising 2 came out about a month ago. I was excited about this, as never owning an Xbox, was never privy to the first game released in 2006. After slogging through twenty-plus hours of this game, I’ve decided I kind of hate it.

But, how can this be, you say? It looks like fun! You get to kill zombies in droves with all manner of weaponry!!! Sure, for the first five hours I was diggin' it, but beyond that, there are just too many things that suck the enjoyment right out of this game. I could accept the frequent load screens and outdated save system and I'll take the blame for not realizing there was an aim button until I was ten hours in, but I do not, however, accept the game's frustratingly cheap boss fights and its timed-mission format.

Dead Rising 2 gives you an open world to explore with vast amounts of side tasks and then puts you on a clock that only lets you do a fraction of them. This game boasts about having hundreds of weapon combinations, but due to the limited amount of time you actually get to experiment, I only ended up using the half-dozen or so that were easily accessible. I understand the timer is supposed to add a sense of urgency, but it’s really just an annoying way to keep the story moving forward. If this choice was an attempt to enhance replay value, I would argue that you might want to concentrate on making the first-go-round pleasurable before worrying about subsequent ones. I’ll relent that Dead Rising 2 may be a completely different experience playing co-op (as Resident Evil 5 was), but there is just no drive for me to keep playing at this point. 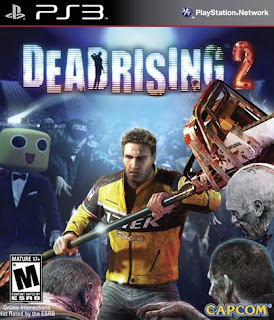 As fun as a bag of dicks.

The craziest thing is that I hear this is an improvement over the original! Who would have thought it never releasing on the PS3 would turn out to be a blessing?

Visceral Games recently released some prequel DLC for Dead Space 2 titled Ignition. It is basically a motion-comic wrapped around three mini-games, which all revolve around hacking devices around the Sprawl, the hulking space station featured in the upcoming title. The first mini-game features snake-style racing, the second is a tower-defense - or rather tower-attack - game and the third is a puzzle game involving light beams and mirrors. I wasn’t crazy about the art direction this time around. The very distinct style of Ben Templesmith (of 30 Days of Night fame) was used in the comic that preceded the original Dead Space and this one seems rather bland by comparison. There's not a lot to Ignition, but it only cost five bones, so it's a decent enough way to kill a few hours. 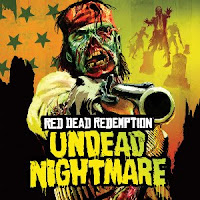 And I've saved the best for last, my friends. Undead Nightmare, Rock Star’s zombie DLC for Red Dead Redemption got released last week. Within a few minutes of firing this up, I was like, “this is already a thousand times better than Dead Rising 2.” It is amazing to me that Rock Star can offer something of such high quality for just ten bucks. Undead Nightmare takes place in the same world, using all the characters you met in the original game, but features an alternate zombie apocalypse storyline that is absolutely soaked in atmosphere every step of the way. Riding into Blackwater, now deserted with cryptic graffiti written everywhere, it was enough to send a chill up my spine. With ammo at a minimum, you really have to pick your shots carefully, as these zombies won’t stay down without a headshot. This becomes increasingly difficult when you have an entire horde chasing you down. And just when I thought it couldn’t get any better, I found and tamed a flaming horse of the Apocalypse last night. That in itself is infinitely cooler than anything that happened in a certain game I am now going to stop talking about.

The only thing to do now is go online, circle the wagons with some buddies and take on the undead masses as a unit. Good times ahead!

Starting next Tuesday, I’ll be fully entrenched with Black Ops, but this weekend will be all about ridding New Austin of the zombie plague. Happy gaming everyone!
Posted by Jay Clarke at 10:02 AM

I guess I should thank you J-bot. It's funny, I was actually weighing whether to get DR2, RDR, or BlackOps.

I'm not a huge gamer by any means. A good game will last me years. I like some military games, and was a late comer to BFBC2.

I though, hey Dead Rising 2 must be pretty good. It's mentioned a decent amount, and from what I thought, it's an open expansive enviroment where you can F! around as much as you want.

I couldn't find it around here in town in stock, so I thot I'd get it when it replenishes.

I asked the clerk, so is Red Dead Redemption any good, worth buying? He didn't seem to think so!

When Black Ops comes out, I'll probably grab a copy of THAT instead.

Thanks for saving me some shekles.

No problem! And if you ask me, that clerk is on crack though, as RDR is almost certainly going to be my fave title of 2010. However, in terms of value (if you're online that is) a Call of Duty game is never a bad buy.