Tobe Hooper's Funhouse was one of those eighties slashers that slipped through the cracks for me as a kid. I remember the coverbox as well as any from back in the day, but for some reason, it remained unwatched. And then Final Girl came along and made it this month's Film Club selection. 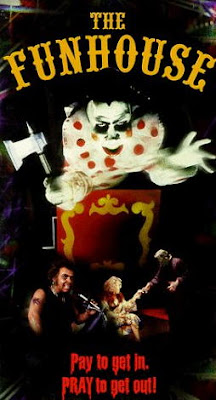 Four teenagers decide to stay overnight in the funhouse of a travelling carnival, but are soon set upon by the deformed man who lives inside it.

It is too bad I missed Funhouse as a kid because my ten-year-old-self would have likely gotten more out of it than my thirty*cough*year-old self did. I'm sad to say that this was a pretty bland affair. The movie opens with a weird cross-pollinated Halloween & Psycho reference that I might have taken issue with if wasn't played as a gag. Essentially, this movie is a series of setups that never payoff. Early on, there's the younger brother trying to scare his older sibling bit that we've seen many times before, but it just gets dropped toward the end of the film. At least in Trick or Treats – though not particularly good either – the little kid has an actual part to play, rather than to just pad out the running time.

There was also a conspicuous lack of gore, with the majority of the deaths happening offscreen. Now, let me be clear. I'm not talking about the skillful restraint Hooper used in his earlier masterpiece, The Texas Chainsaw Massacre where he made you think you saw more than you actually did. No, I'm talking about just blatantly holding out on the goods. Funhouse was released in 1981, at the height of the slasher renaissance, so you can be sure the people who turned up to see this were expecting to see some red. Hooper even had Rick Baker at his disposal and all he really got him to do were the effects on the sideshow freaks and the big bad – which were the best things in the movie I might add.

Funhouse just seemed like a wasted opportunity to me. It has a slow and plodding setup, which would have been fine if it actually led up to something, but it doesn't. The funhouse itself is creepy enough, but as far as movies that use this locale go, I don't know if it even has as much to offer as something like Dark Ride, a middling Jamie-Lynn Sigler vehicle from a few years ago. Funhouse is certainly a functional effort, but not one of Hooper's better ones, that's for sure.
Posted by Jay Clarke at 7:28 AM

Unfortunately the funhouse is more of a signature of Hooper's career than "The Texas Chainsaw Massacre."

True, but I do have a soft spot for Lifeforce.

I was excited to check this out on AMC's FearFest this year as it was a hole in my pop culture/slasher knowledge.
I really enjoyed the atmosphere it was creating and the creature looked pretty cool... but it just... didn't... have... SOMETHING.

I'd be curious to hear some DVD commentary on it but I'm not sure any exist.