The End Of The Millenium.

I was running around – as I’m sure you all were – doing Halloween-related activities all weekend, but I did manage to take in The Girl Who Kicked the Hornet’s Nest on Sunday afternoon. 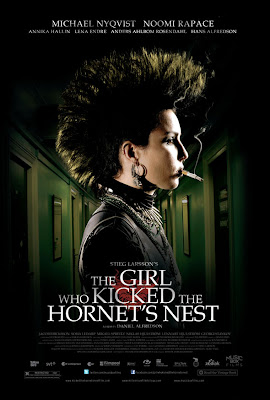 With Lisbeth (Noomi Rapace) now hospitalized after the run-in with her estranged father, Mikael (Michael Nyqvist) goes about exonerating her of attempted murder charges, as well as exposing the government conspiracy in which she is entangled – even if it puts him and his fellow editors in harm’s way.

The Girl Who Kicked the Hornet’s Nest was a solid conclusion to an excellent trilogy. It is probably my least favourite of the three movies, but again, as with my comments on the second film, The Girl Who Played With Fire, it is more of a preference thing. As I said before, the main draw of the series for me was the interaction between Lisbeth & Mikael and it has never been as concentrated and pitch-perfect since that first film, The Girl With the Dragon Tattoo. Again, I realize why this is the case, but that doesn’t keep me from wishing now, does it? Nevertheless, the third film is extremely dense and calculating, with a myriad of characters weaving in and out of the narrative. However, the storytelling is so superb that I never felt lost. Rapace & Nyqvist are again exceptional in their roles. This being the third time they have portrayed these characters, you can see just how infinitely comfortable they are in their skins. 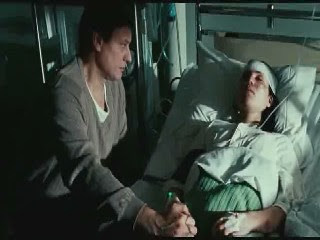 I think that as a whole, the Millenium trilogy is a remarkable achievement. I watched Played With Fire again a few days ago as a refresher and it was even better the second time around. I have no doubt that the same will ring true with Hornet’s Nest down the line, as right now my enjoyment was based more on seeing the resolutions of the issues from the previous installment, rather the film itself minute-to-minute. It is certainly not in a hurry to get where it is going at points, that's for sure. Thinking ahead to David Fincher’s remake, that will present a further challenge to add to an already hefty pile. I would imagine the suits will be screaming at him to punch things up a bit.

And yet, even with its slow pace, I was never bored and when it ended – rather oddly I might add – I found myself wishing there was more. I crave further adventures with these beloved characters I’ve gotten to know over the last eight months. I did hear that an unfinished manuscript for a fourth Millenium book was discovered recently, so who knows? Maybe I’ll get that wish someday.

Even though, for me personally, the series’ best moments were at its start, I think this is an astounding trilogy of modern thrillers that gave us two iconic characters for the ages.
Posted by Jay Clarke at 1:55 PM