I Love You, Pumpkin.

Last Thursday, the newest Syfy original with the best title I’ve heard in a while, Sharktopus played the Bloor. 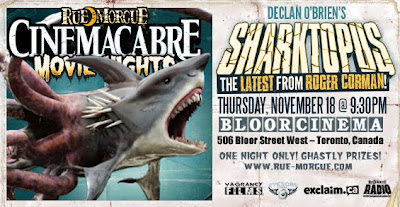 A half-shark, half-octopus created by the military breaks free from its restraints and wreaks havoc along the coastline of a Mexican resort.

Oh, Sharktopus. It’s fun to say, and it was fun to watch. It’s not a good movie by any stretch, but my friends & I had a good time. Eric Roberts sure looked like he was having a blast soaking up the sun and drinking mass amounts of scotch, although his “relationship” with his daughter Nicole (Sara Malakul Lane) did get a little creepy at times. 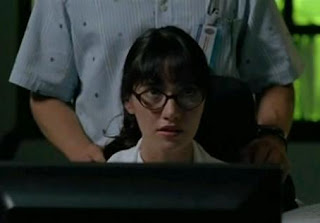 "Uhh Daddy? Remember when we talked about personal space?"

Sharktopus was a damn sight better than Shark In Venice, as you actually got to see the creature advertised on the box. Sure, it's incredibly cheesy CGI, but I favour that over just flashing the same clips from National Geographic documentaries over and over again. The design of the Sharktopus is pretty cool and certainly the best so far of these digital creature features we’ve been inundated with over the last little while. For the most part, Sharktopus is just laughably entertaining. There is some joy to be had watching the characters fumble around, trying to stop the title abomination, especially considering the “hero” of the movie, Flynn (Kerem Bursin) is such a terrible marksman that he actually calls attention to it with the line,

“I been missing all day and I’m getting pretty tired of it.”

I think it probably had something to do with the effects guys not being on the same page with the dudes who hold out the tennis balls on set, because half the time Bursin wasn’t even shooting at the creature.

Like I said, laughable. But despite the random 24-style split-screening and Roger Corman’s eye-rolling cameo, I think the only real negative here is the lack of T&A. I understand Syfy distributed this, so that wasn’t in the cards, but in this type of movie, the absence of skin is pretty conspicuous. Although, after being treated to the R-rated goodness of Piranha 3D earlier this year, I guess I may be a little bit spoiled. 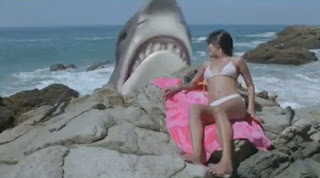 "Excuse me Miss, I couldn’t help but notice that you’re not naked."

These types of movies are often as much, if not more, about the gathering with friends for a communal experience, than the movie itself. Sharktopus is far from good, but I wager it was never supposed to be. My crew & I can certainly say we had a better time watching this than we did Skyline a few days before. It doesn’t matter how good your effects are, a bad movie is a bad movie. At least in this case, that crazy ol’ Carcharadon-Cephalopod kept us entertained.
Posted by Jay Clarke at 12:39 PM