The Face Of Fear.

Every year at TIFF, I try to catch a least one Spanish film. Previous years have included the likes of Pan's Labyrinth, The Orphanage and [REC]2, so you can see why I would gravitate toward this country's product. This made, after seeing his earlier efforts 28 Weeks Later and Intact, Juan Carlos Fresnadillo's newest film Intruders an easy pick. 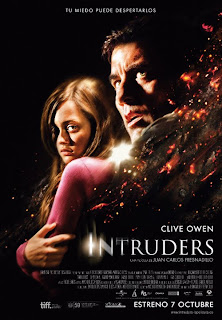 A father (Clive Owen) desperately tries to protect his daughter Mia (Ella Purnell) from an intruder that keeps entering her room at night.
I have to say that, while I didn't feel as connected to it as I have some of my more treasured Spanish offerings, I kind of dug Intruders. Even though it was fairly straightforward, with a last minute reveal that was nothing to write home about, I found myself coming back to it over the last few days. I think it was the concept that grabbed me, rather than the filmmaking. Fresnadillo's exploration of the origin of fear and what lengths parents will go to protect their children was really interesting to me. It was initially a little weird to see Clive Owen injected into one of these films, but he did a good job conveying the helplessness a parent feels when they can't ease their child's suffering. 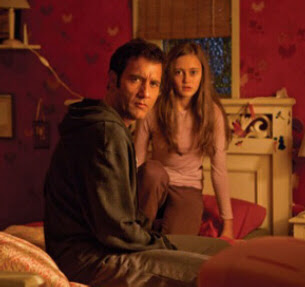 Surprisingly, the liberal CG didn't bother me as much it should have, though it may have been due to it being shrouded in shadow most of the time. I was hoping that Intruders would have the unsettling creepiness that other Spanish offerings like The Orphanage and The Devil's Backbone possessed in spades, but it fell short of that mark most of the time. I think there may have been something lost by showing the monster right away. It served the story, but we all know that the more you show, the less scary it becomes.
The biggest problem I had with Intruders was that the action sequences weren't shot particularly well. They were mostly of the close-up, quick cut variety that I can't stand. I wish Fresnadillo would go back to using Xavi Giménez to shoot his films. They worked together on Intact in 2001, which featured a brilliant sequence where people were running blindfolded through a densely wooded forest. Fresnadillo's current cinematographer, Enrique Chediak is the same guy he worked with on 28 Weeks Later, which had its moments – we all remember the early sequence with Robert Carlyle being chased through a field – but there was a lot of shaky-cam bullshit in that, as well. I think Intruders could have really benefitted from the cooler hand of Giménez, whose other credits include gorgeous films like The Abandoned, & The Machinist & Transsiberian . 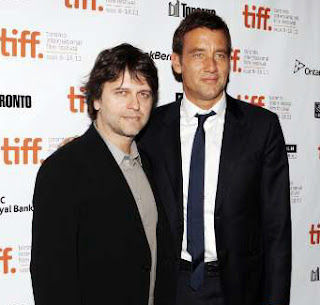 Director Juan Carlos Fresnadillo & star Clive Owen.
Though it doesn't approach the high standard set by its peers, Intruders is still a solid effort, anchored by a very fascinating concept.

TIFF photo courtesy of Reuters.
Posted by Jay Clarke at 10:00 AM