Sunday night saw the return of Alexandre Bustillo & Julien Maury to The Ryerson stage. After these two maniacs tore the roof off the place four years earlier with their debut Inside, horror fans have anxiously been awaiting their follow-up. This eve, that came in the form of a weird little thing called Livid. 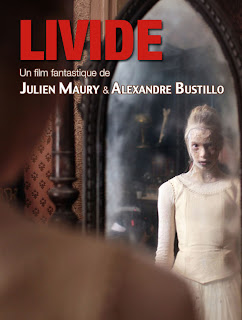 When Lucie (Chloé Coulloud), a nurse-in-training, tries to rob the estate of one of her patients with some of her friends, they discover the house may hold a dark secret.
If I were to describe Livid in one word, it would be fractured. There are a lot of solid elements to the film, but it doesn't come together as a whole in my opinion. I had been told it was a very different film from Inside, and that is certainly true. This film has very little of the visceral energy that its fore bearer generated almost immediately. In fact, if it wasn't for the cameo from Béatrice Dalle and the multiple appearances of scissors, I may not have been able to recognize this project was birthed from this duo at all. 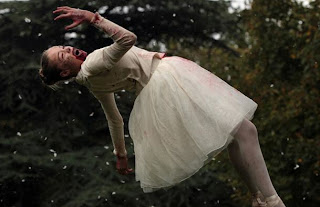 Livid takes a very long time to get where it is going, but the darkly Gothic visuals were enough to keep me interested to a point. However, because the first half was so restrained, when the gore started flying later on, it almost seemed out of place. To me, it felt like they were doing what was expected of them and not what served the story they had started. If it had been excessive throughout, it would have felt more natural. Despite its slow pace, there is a lot going on in this movie. Perhaps too much. I can't help but feel this would have resonated more if it was simpler. Take Nacho Cerdà's 2006 film The Abandoned for example, which was all atmosphere and sound design. There wasn't a lot to the story, yet it was still effective.
There were a lot of references sprinkled throughout Livid. The nods to American Werewolf, Halloween III and Dellamorte, Dellamorre were met with some chuckles, but the main overall influence for the film would have to be Suspiria. In fact, I would say all of the surreal works of Dario Argento were the blueprint for this film. Unfortunately, Bustillo & Maury are not as adept at keeping the more fantastic aspects of their subject matter from going off the rails, as the Italian maestro was in his prime. Some of the most interesting elements, one involving a mirror and another taxidermy, could've been much more than just throwaway moments, and the last twenty minutes of Livid borders on the nonsensical. 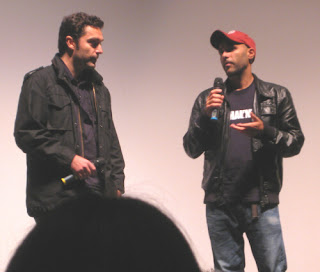 Directors Alexandre Bustillo & Julien Maury.
Even going in with lowered expectations, knowing this would not (and could not) be another Inside, I was still left a little wanting. I respect Bustillo & Maury for wanting to do something on their own though, and not just taking the first Hollywood property that got thrown their way after their debut. In the end, the visuals and set pieces are what I'll take away from Livid, but not much else.
Posted by Jay Clarke at 1:04 PM