You Think Your Job Sucks?

A group of kitchen workers at a mental institution desperately try to escape when the power goes out, releasing its dangerous population out into the halls.
It could've been that I was expecting something different, but The Incident didn't really do anything for me. Considering this was directed by a renowned music video director – who has worked with bands such as U2, Air & The White Stripes – I thought it would be a little more frenetic. Don't get me wrong, The Incident is well made and a realistic interpretation of how this situation could play out, but that may have also been the reason that it never hooked me. The past two midnights have reminded me of the delicate balance of storytelling. Livid needed to be simpler, yet The Incident could have used, at least for me, more story elements; or at least a bigger payoff after all that build up. It seemed like once the conflict really got going, it was over. 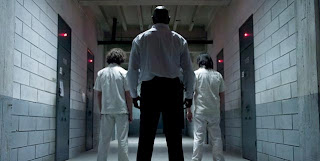 Getting back to the realism though, I did appreciate that none of the characters did anything stupid, and always reacted to their situation appropriately. There was no “movie logic” in this film and by setting it in 1989, Courtes automatically avoided having to explain away cell phones and Internet access.
I may have not been affected by the Incident, but I know that some attendees were. During a particularly gory scene at the film's climax, I was distracted by a flashlight to my right. Later, I found out the disruption was due to a couple of people passing out. This was kind of suprising, as this film just went right through me. Am I really that desensitized? Maybe I was just burnt out. After all, it was my third film of the day and had spent the afternoon taking advantage of an open bar. 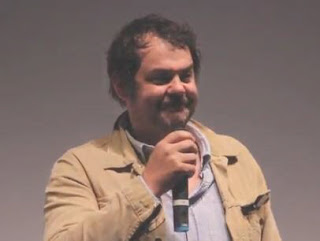 Director Alexandre Courtes.
Anyway, in short, this was, as my friend DirtyRobot put it, a “serviceable” movie, but the clinical presentation of it, left me cold.
Courtes photo courtesy of thesubstream.com.
Posted by Jay Clarke at 11:19 AM