When the Juan of the Dead trailer popped up online a few months ago, I was obviously intrigued. Billed as the first Cuban zombie movie, it played TIFF on Monday as part of the Contemporary World Cinema programme. Naturally, I made sure I was there. 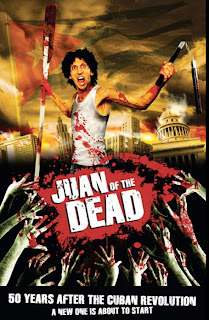 When zombies start appearing in his neighbourhood, ne'er do well Juan (Alexis Días de Villegas) gathers his friends together to clean up the streets.
I had a lot of fun with Juan of the Dead. When viewing a zombie comedy, my expectations are generally lowered, as there's not much new ground to cover, but Juan of the Dead subverts mediocrity in a few different ways. First, as could be inferred by its title, just calling this movie a parody of a parody does it a disservice. Using the anniversary of the Cuban revolution as a backdrop, director Alejandro Brugués uses this opportunity to drop in some subtext. His characters are used to civil unrest and simply go about their routines during the ensuing chaos. There were several Cubans in attendance at my screening and they went batshit for this movie. Their reaction went beyond the typical 'let's support our countryman'. I think they genuinely responded to it.
I really liked how the movie morphed into a zombie version of Ghostbusters, and I'm actually kind of shocked this was the first time I'd seen this done. When I thought about it, I realized it would take someone like Brugués to come at it like this. You take other contemporary zombie flicks, like say, the two this movie is referencing, and you'll see what I mean. In Dawn of the Dead, the characters' first reaction is to flee and seek shelter and in Shaun of the Dead, all he wants to do is get his friends and family to safety. In Juan of the Dead, the characters take great exception to these zombies coming into their turf and stirring shit up. Just being in a theatre with a bunch of Cubans was enough to show me how proud they are of their country. It has its problems, but it is theirs, and nothing, not even flesh eating zombies, can drive them out. And if they could make a little coin while protecting it; why not? 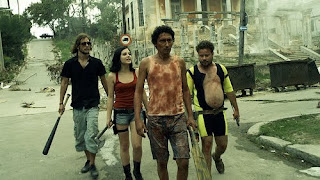 Then, there is the great cast. The two leads, Juan and his pal Lázaro (Jorge Molina) have a relationship every bit as natural as Simon Pegg & Nick Frost in Shaun of the Dead. They play off each other brilliantly and keep things grounded. All zombie comedies have their share of heightened reality and camp, but in contrast to something like last year's Evil: In the Time of Heroes, Juan and his team – which also includes his daughter Camila (Andrea Duro) and playboy Vladi California (Andros Perugorría) - always know how to rein things in when they need to.
The kills, the bread & butter of any zombie flick, are also top notch, including one epic set piece that this seasoned zombie fan had never seen before. There was a good amount of decent zombie make-up, with some scenes utilizing as many as three hundred extras at a time. Some of the larger-scale effects shots were fairly comical – I assume that was intentional – but overall Juan of the Dead seemed a lot bigger than what it likely cost. 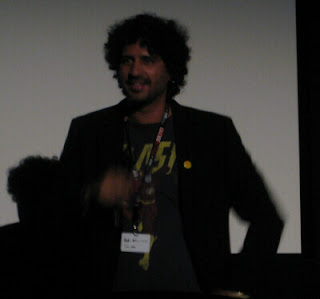 Director Alejandro Brugués.
If zombie comedies are your bag, I urge you check out Juan of the Dead, as it offers up all the hallmarks and does a bang up job on all of them.
Posted by Jay Clarke at 11:00 AM