On Thursday afternoon, I checked out Eduardo Sánchez's new film Lovely Molly. I was glad to see he finally had something at Midnight Madness, as he – being one-half of the team that brought us The Blair Witch Project in 1999 – is an important figure of what we consider today, as modern horror. 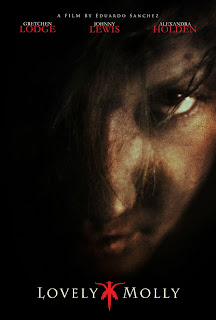 When Molly (Gretchen Lodge) moves into her old childhood house with her new husband, Tim (Johnny Lewis), she starts to suspect they aren't alone.
I'm actually glad I didn't see the midnight screening of this, as it is rather sedate. It is largely a woman in an old house, left alone with her demons, both figurately and possibly literally. The real strength of this film though, is Lodge as the title character. I was amazed to find out this was her first role, as she totally owns it. Apparently, Sánchez made this remarkable discovery at an open audition.
Like Intruders, I found the impetus of the story fascinating. Sánchez, being a big fan of Bill Friedkin's The Exorcist, always wanted to make a possession film. However, his take was from the perspective of a low-income household. What do you do when you don't have the financial resources to seek out professional help? Well, Molly goes about trying to film herself and the unexplained events in the house, to prove that she isn't crazy. It is an interesting idea, and also a fairly creative way of justifying the video camera conceit, and only partly filmed in this fashion, so it never becomes tiresome. 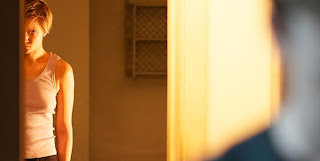 In addition to going back to his roots with the first-person-camera technique, Sánchez again used Maryland as his shooting location. The forests and creaky house brought back some chilling memories of 1999 for me. What is with Maryland and crazy-ass demons – real or imagined – anyway? And by “real or imagined” I mean that Lovely Molly is one of those movies that is open to interpretation. There are several extra storylines, including drug use and childhood trauma, that yield more than one possible explanation for the events that transpire.
I feel Lovely Molly falls in the middle of Sánchez's filmography. It is better put together and more intimate work than 2008's Seventh Moon, yet doesn't quite reach the raw energy and ingenuity of his follow-up to Blair Witch, 2006's Altered. As far as this year's Midnight fare goes, I would take this over The Incident, due to my oft-talked about preference of female protagonists. 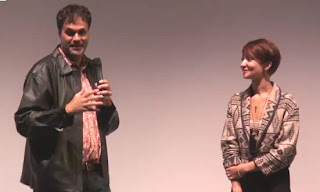 Director Eduardo Sánchez & star Gretchen Lodge
This is a solid character piece that owes its success to its lead , as much as it does its director. If you live in a creaky old house, you may double check the doors and leave the lights on after this one.
Posted by Jay Clarke at 8:10 AM