Doug Aarniokoski’s The Day was probably the closest Midnight Madness came to a ‘red carpet’ premiere this year. While 2010’s Midnight run featured big guns like John Carpenter & James Wan and big stars like Woody Harrelson & Ellen Page, this year’s installment has been one of discovery. 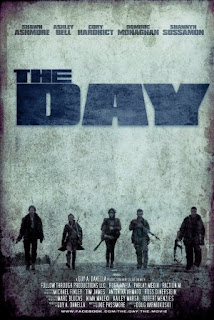 In a post-apocalyptic world, a group of five survivors seek safety in an old house, but are soon attacked by a band of nomadic cannibals.
The Day was okay, but nothing spectacular. To me, it lacked that extra dimension that would have made it pop. You never really got a sense of why the world ended, and how these characters came to be a group. Writer Luke Passmore explained later in the Q&A that that was his intention. The how and why were irrelevant, and the movie was about people dealing with their situation. I can certainly appreciate that, but the problem for me was that I didn’t find them particularly interesting. And that is not a knock on the cast – which includes Shawn Ashmore & Dominic Monaghan – as they’re all competent in their roles. They each have their moments in the sun, but don’t have a lot to work with for the most part.
Last year’s Midnight People’s Choice Award winner Stake Land is a perfect example of a post-apocalyptic movie done right. You line The Day’s characters up against Stake Land’s and there is no comparison. Now, granted the latter is at an advantage due to vampires being more interesting than cannibals, but there was just way more meat on Stake Land’s bones. 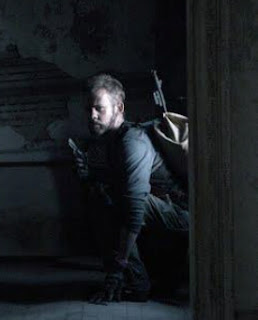 The Day’s visual style was par for the course, as well. It had that over-saturated earthy tone that populates so many films of this ilk. Perhaps most troubling was the abundance of digital blood in this movie. Are you seriously going to tell me it was really cheaper to do a throat slash with a computer, rather than on set? There's a line-up of effects guys (and gals) that would’ve done it for a song. When filmmakers slap on large gore moments in post, it makes me think they don’t care, or worse, that they think that we won’t.
The highlight of The Day though, was Ashley Bell. Seeing her transform from the wholesome and helpless girl in The Last Exorcism into The Day’s shotgun toting, machete-wielding badass Mary, was a real treat. And to be fair, I did enjoy the last half-hour or so, but I love me a siege movie, so it wasn’t a hard sell. 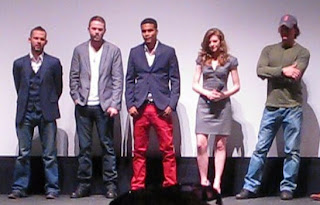 Actors Monaghan, Ashmore, Cory Hardrict, Bell & Director Doug Aarniokoski.
So, the Day wasn’t bad, just nothing to write home about. I did however; get a kick out of how offended the older lady a few rows behind me was, when the lights came up. Although, I’m not sure if she was “disgusted” by the movie's subject matter, or the bloodlust of the crowd around her. Seriously though, did she not know what happens at The Ryerson after dark?
Posted by Jay Clarke at 3:37 PM

I thought The Day was far more satisfying than Stakeland. Stakeland was poorly written in my opinion ... with no real resolve. Eh, to each their own I guess.

Really? Wow. Yeah, I guess so.