Despite all the video stores I visited, and all the hours spent watching First Choice when I was young, there are still many horror films that I've never seen. More specifically – as simple math tells you no one could possibly see EVERY horror film – there are still tons of movies that I would have loved to have seen when I was younger, but just never had access to. Even when I got older and found the Toronto video stores that I've gushed over in earlier posts, there are still some glaring gaps. Well, last week I got to strike another one off that list. 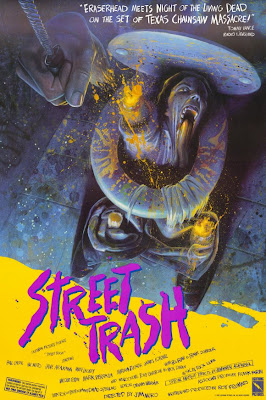 After a New York liquor store owner finds an old crate in his cellar filled with bottles of Viper, he sells it off to the local homeless population for a buck a bottle. Unfortunately for them, drinking it has some gruesomely fatal side effects.

This movie was hilarious. Street Trash is like a glorious hybrid of Frank Henenlotter and Lloyd Kaufman, with a little Sam Raimi thrown in for good measure. The 35mm print Rue Morgue acquired for the screening was absolutely gorgeous. After the ugly projection of my last visit to The Bloor – and even with the depravity of Street Trash's content – this seemed like comparing a silver platter to a paper plate. I don't think I've seen this much colourful gore since Evil Dead 2. When is the last time you saw purple mixed in with your blood and guts? There was stuff in this movie that I'd never seen before, which is a rarity in itself. Severed penis monkey-in-the-middle?! That's just gold, people. 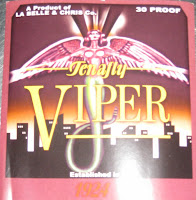 I loved the Viper liquor. If that isn't a wickedly esoteric icon of eighties horror, I don't know what is. I kept thinking to myself during the film, 'I have to check and see if anyone's made those and put them on the Web.' How awesome would it be to print one out and slap it on a bottle of Fireball? And the funny thing is, that even though the Viper seems to be a main element, there is a good chunk of the movie where it disappears completely and left me thinking, 'what the hell is this movie about?' It was yet another way this movie throws you for a loop. Now, I know I may sound like a hypocrite by praising Street Trash after recently scolding Cabin Fever 2 for padding its movie with silly gore scenes, but there just seemed to be a underlying level of technical skill involved that you just don't see in movies of this obvious low budget. Looking at director J. Michael Muro's ample experience working with a camera should tell you that he knew what he was doing. He is the reason this movie isn't an unwatchable disaster. Like the aforementioned Henenlotter and company, they keep you interested with visuals and situations you just haven't encountered before. It is that freshness that makes these crusty eighties gems claw their way out of the toilet of mediocrity and become classics that people will line up to see twenty-plus years later. 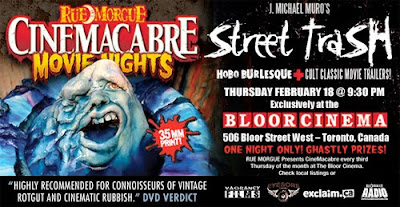 This was such a great night. As much as I wish I wasn't so late to the party, this was probably the best possible way I could have experienced Street Trash. In a theatre, with friends, after some hobo burlesque.


Viper label courtesy of Robert Mitchell.
Posted by Jay Clarke at 10:05 AM

Classic film that lives up to its nastiness. I wanna drink some Viper!