Hello all. I'm squeezing this in between some errands I have to run today. Let's see what we got this week, shall we?

Keep This With You At All Times.

I found this comprehensive zombie flowchart on Digg earlier this week. You can click on it for a closer look. 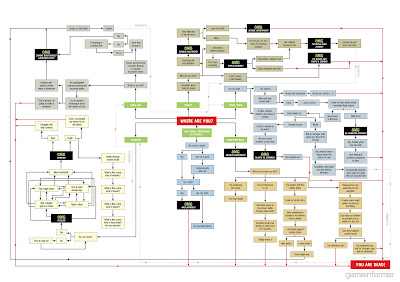 It seems like they've got everything covered here, although is it just me, or does it all lead to the same conclusion?

A Nice Place To Live?

I saw a commercial for a new ABC show called Happy Town during last week's episode of Lost.


The first thing I thought was, 'so, this show is this year's Harper's Island?' Actually no, that's a lie. My first thought was, 'is that the chick from those annoying cream cheese commercials?' Anyway... Granted, this ad does nothing to sell the show to me - mentioning Twin Peaks already sets the bar impossibly high - but the idea of a murder mystery per year does intrigue. As you remember, I liked Harper's Island more than I disliked it, so I am not adverse to visiting Happy Town. Besides, anything with Sam Neill and Amy Acker gets a pass for at least a few episodes, am I right? Happy Town premieres April 28th.

Again With The Awesomeness.

Late Night Classics on Killerfilm posted another great interview this week. This time Jason Bene tracked down actress Devin DeVasquez, who appeared in Society, a great little gore flick by Brian Yuzna. Bene, I don't know where you keep finding all these people, but keep it up. Here's an excerpt.

Jason Bene: When you read the script did you think do I really want to do this movie?

Devin DeVasquez: The motto was you have to be born into ‘Society’. The rich suck off the poor literally in this movie, it’s a literal thing. This is a dark comedy.

Jason Bene: The story is metaphorical and allegorical on how we separate ourselves in society.

Devin DeVasquez: The fact that I played a very rich Beverly Hills girl that was very mysterious and who had this mother who coughed up hairballs and was very strange looking. You didn’t quite know what to think of my character, but I had lines in the movie like “coffee, tea, or would you like me to pee in it”? Some of the lines in the movie were very risqué. You just didn’t see anything like it at the time.

Click here for the rest of the interview.
Posted by Jay Clarke at 11:21 AM