That’s what last weekend was all about. Taking a look back on old goodies, some of which I hadn’t seen since I first watched them. Friday night was another one of Serena’s (in)famous movie nights, where we took in some select installments of the Nightmare On Elm Street series. I assume the intent was to refresh our memories on why we all love it so, before Platinum Dunes can spray their cinematic diarrhea over Wes Craven’s legacy. 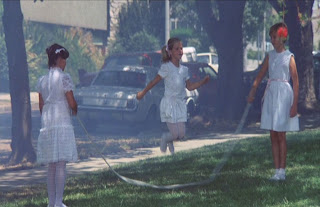 One, two, Bay is coming for youuu.

I exaggerate, of course. I won’t see the remake, so it's really of no consequence to me. Even Wes Craven was being diplomatic about it back when he showed up at the Festival Of Fear a few years ago. He said something to the effect of --

“hey, if there’s one movie that can be improved by today’s technology, it’s Nightmare. You can really fully explore the dream world now.”

I’m afraid I have to disagree with you, Wes. We all know that CGI, for the most part is not scary, so I fail to see how this will help a retelling of Nightmare in any way. Besides, from the trailer, apart from dwelling more on Freddy’s trial and death, the remake looks like a carbon copy of the original. That worked out so well for the Psycho remake, didn’t it? I’m talking too much about the Dunes, so let’s move on.

It was a night of good friends, good movies and CAKE! 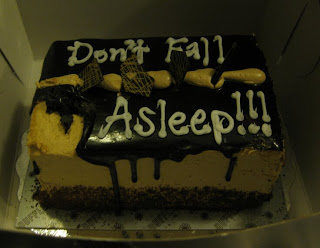 Eat this and that won't be a problem.

Watching the original A Nightmare On Elm Street is always a treat because it is such a visual feast. This was a mind-blowing concept at the time. It came out when the market was saturated with slashers, but unlike Jason (or any of his many contemporaries) there was no escape from Freddy, as he was where you went every night! It’s still a great movie, brimming with creativity and fresh ideas. From there we moved onto A Nightmare On Elm Street 3. This is where Freddy went from boogeyman to catchphrase-spewing pop culture icon. This is also the part that gave us the back story of Freddy’s lineage. Part 3 had not only Heather Langenkamp and John Saxon return from the first film, but also featured Larry Fishburne and then newcomer Patricia Arquette.

Lastly, the few still standing took in the final film of the ‘Nancy trilogy’, Wes Craven’s New Nightmare. This was the first time I’d seen it since it originally came out in 1994. Again, another great idea. This movie was way ahead of its time and that is perhaps why it didn’t do so well when it came out. Well, that and horror as a genre was in the shitter at the time. Things didn’t get back on track until Craven returned with Scream two years later. Seeing the original and New Nightmare back-to-back, you really see how many parallels they share. I thought it stalled a bit towards the end, but they certainly took huge strides to make Freddy scary again. 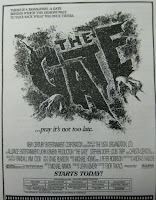 The following night I saw the 1987 flick The Gate on 35mm. That was another one I hadn’t watched since its original release and holy cow, has it aged well! Stephen Dorff is so young in this movie; he’s pretty much unrecognizable. I was worried the effects would be cheesy now, but they are still solid. I always thought it was all stop-motion animation, but it turns out that they used a lot of live action stuff, as well. Those little demon guys were actually often dudes in suits. Jonathan Llyr (who played one of them) was at the screening and let us in on a few secrets. They were shot, either with props built to scale or by using perspective with strategically placed cameras. It’s ingenious stuff. The Gate was fairly big around here because it was shot locally - it actually beat out Ishtar for #1 at the box office in its first week of release. The TV commercials for The Gate are forever burned into my mind.

Sunday, I spent some time mucking around with my new toy, a Magnavox VCR/DVD combo that I'm using to transfer a whole bunch of my old stuff to DVD.

Yeah, I know, just what I need. ANOTHER project!

So much to do, so little time. Even this post I wanted to get up for Monday, but I had to drive straight from work to catch an early screening of The Girl With The Dragon Tattoo. It was pretty fucking solid, but more on that later in the week. Until then...
Posted by Jay Clarke at 8:02 AM

The Gate was the best screening I've been to in a while. Brought back so many memories. Now I must spend some time tracking down the DVD...shouldn't be too hard.