Flight Of The Living Dead: Outbreak On A Plane was another Zip.ca special that had spent a long time sitting on my coffee table. I finally got around to it recently and almost let it slide without mentioning it here… ALMOST. 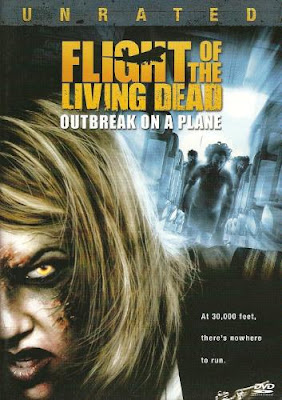 Even though I had a pretty good idea of what I was in for, I truly wasn’t expecting it to get as ridiculous as it does. I mean, they REALLY heap it on. They pretty much used the same template as Snakes On A Plane, but Flight makes that Sam Jackson vehicle seem plausible by comparison. That is why instead of reviewing this movie, I'm going to just point out some of my favourite parts. And by favourite I mean the stuff that made me laugh out loud and/or throw out a quip as if Crow & Tom Servo were sitting next to me. Now, let me make myself clear. I am a firm believer in suspension of disbelief, hell this is a zombie movie, after all. However, if one chooses to set their film on a plane, one has to abide by certain physics. For instance, I’m pretty sure you can’t turn the inside cabin into a Wild West Show without there being severe consequences. At the climax, someone actually opens up the main exit, like they’re just reaching out for the mail. And that’s not even the worst of it! Someone makes a fucking grenade out of those tiny liquor bottles and aerosol cans and throws it down into the cargo hold.

This plane is INVINCIBLE! And since when do commercial flights have missile detection capabilities?

And the characters! There’s this pro-golfer who is obviously supposed to be Tiger Woods, but given recent events it’s pretty hilarious that there’s a scene where his wife gets uppity because she thinks he’s flirting with the stewardess. 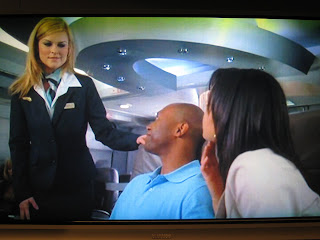 No turkey, unless it’s a club sandwich.

Richard Tyson is in this movie! I’m not sure if this is a step up or down from his turn as a werewolf rapist in Big Bad Wolf. A lateral move, perhaps? You want to know what my favourite part was though? When they cut to an air traffic control centre in Yellowknife, Canada.

Hilarious! Come on, we’ve NEVER forbid anybody from doing ANYTHING!!!

Though there is a good deal of gore in this, it almost seems reserved under the circumstances. There’s no T&A to speak of either. In a zombie movie, these are not generally the areas where you practice restraint. Surprisingly, the premise itself did actually work better than I expected. However, like I said, the ridiculous does come fast and furious once more than a few become infected. I did find the idea of ‘the nest’ an interesting one though. I’d like to see that explored further in other titles. Flight Of The Living Dead is obviously best ingested with friends rather than oneself and its amateurish style isn’t going to win it any points, but there is some fun to be had here.
Posted by Jay Clarke at 6:01 PM