Yesterday, I went to a screening I’d been looking forward to for quite some time. It was Cannibal Girls at The Bloor. It had been almost twenty years since I’d seen it, so it was like watching it again for the first time. 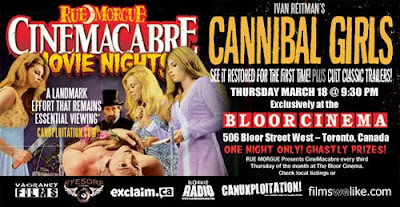 Damn, this movie was so much fun with an audience. The new remastered version (presumably the same one that played SXSW last weekend) made it look as good as it ever has. I remember it being funny seeing Eugene Levy & Andrea Martin outside of their usual element back when I saw Cannibal Girls circa 1990. Now, it was downright surreal. You really get an idea of just how hairy that man was in the seventies. And the clothes! I shit you not; he was wearing a knitted tie in one scene. As for Martin, after this and her stint in 1974’s Black Christmas, it’s almost surprising that she didn’t appear in more Canadian horror films from that era. They are great together though and made for some great moments, especially Levy’s cigarette-holding guitar serenade that had everyone in the theatre belly laughing. Considering the players here, it is no surprise there were hefty amounts of humour to be had – intentional and unintentional – making Cannibal Girls more comedy than exploitation flick. 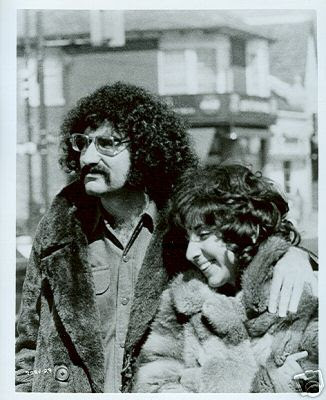 It does have its sprinklings of T&A (provided by lovely ladies Randall Carpenter, Bonnie Nielson & Mira Pawluk) and gore throughout, but considering this is the product of the man who would later bring us Animal House, Stripes and the quintessential Ghostbusters, it is pretty obvious where Reitman’s allegiances lie. I have to echo emcee Dave Alexander’s sentiment, that if not for the career path Reitman took with those above titles, he could very well have become the H.G. Lewis of Canada. There was a definite vibe there, with not only the subject matter, but the colourful characters, as well. You could have swapped out the Reverend Alex St. John’s (played by Ronald Ulrich) character with Lewis’ Montag The Magnificent or Fuad Ramses without batting an eyelid.

Two of the actors in the film, Alan Gordon and Allan Price, who played the first and second victims of the Girls, were in attendance and relayed some insights about the production. They were quick to point out that regardless of how cheesy the movie might appear, Reitman was always in control and comedy was the main intent. They also said that, as the main credit titles would suggest, a lot of the dialogue was adlibbed by the cast based on a treatment by Reitman, Robert Sandler & Daniel Goldberg. Fellow Torontonians might find it interesting to know that the lady who played motel owner Mrs. Wainwright was May Jarvis of the ‘Jarvis St.’ Jarvises. That’s a cool little connection that I’ll now recall every time I’m en route to DirtyRobot’s place. 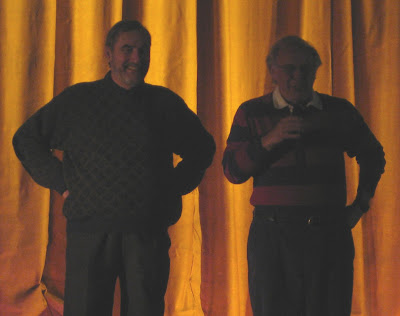 Sure, the movie is dated and rough around the edges, but I think that works in its favour. Its historical value is undeniable. It predates The Texas Chainsaw Massacre, of which it shares a few elements, by a full year and Reitman was instrumental in kick-starting the Canadian horror scene, opening the door for other icons like Bob Clark and David Cronenberg.

Lastly, I’ll sign off with this little anecdote. When my father saw on Facebook that I was attending this screening, he messaged -

“I saw this at the No.5 Drive-In. Good movie. One hint, never let a chick handcuff you to the bedpost.”

As you can see, the apple didn’t fall far from the tree.
Posted by Jay Clarke at 5:30 PM