I've likely mentioned before that the Final Girl Film Club is a great way to revisit titles that I may not have otherwise. Stacie's latest pick, Higuchinsky's 2000 film Uzumaki is one such film. 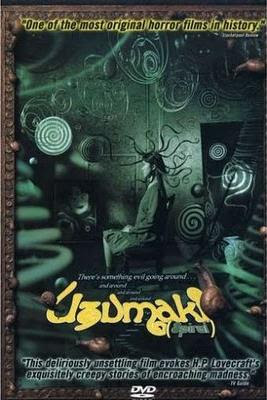 In the early 2000's, after having my mind blown by Japanese staples Ringu and Battle Royale, I started to absorb their cinema like a sponge. It was around this time that Uzumaki fortunately screened at Toronto's Royal Cinema. It was there that I was truly introduced to just how strange those guys behind the sun could really get. Now years later, after a constant diet of Miike, Sono and Tsukamoto, I am aware of how different Japanese creative sensibilities often are, but back then, Uzumaki sent me spinning like James Stewart in Vertigo. 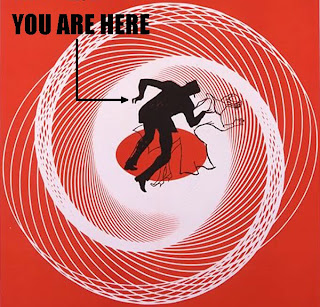 So, what's this movie about? Good question. If I HAD to explain it, I'd say it's about a cursed town where the inhabitants are slowly driven mad by 'uzumaki', or anything with a spiral pattern. The two main characters are high schoolers named Kirie (Eriko Hatsune) and Shuichi (Fhi Fan), who try and escape before falling victim themselves.

Uzumaki is based on the popular Manga by Junji Ito. I haven't read it, but have taken in one of his other works called Gyo, which was equally off-putting, if only that it realized my worst nightmare of sharks walking on land! This guy is clearly not right in the head. Watching Uzumaki was a surreal experience when I first saw it, just because there was so much going on that I just hadn't seen before. I was completely caught up in the crazy imagery that wasn't so much as creepy – though it had its share of that – as it was incredibly weird. Seeing it now, I was more aware of its offbeat camera angles and transitions and how Higuchinsky would often put something outside of your field of vision that you wouldn't pick up until just before he cut to something else. 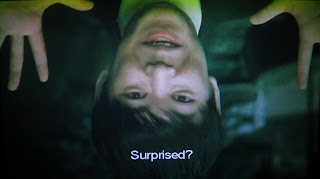 That this bizarre film is Japanese? Nope.

The ending still threw me for a loop, but when dealing with a movie as erratic as Uzumaki, one almost doesn't expect any sort of clear resolution. After all, the Japanese have always been an ambiguous bunch, haven't they?

I feel I might have to crack out the Thesaurus now, as I can't really further articulate the weirdness within. It's really one of those titles that just has to be experienced. If anything, Uzumaki is a perfect example of the strange fiction that lies out there in Japanese circles. I still find their cinema fascinating to this day, which is probably why I endured an hour-long deathmatch with my dusty all-region player earlier this week, just so I could view my loaned Region 2 copy of Love Exposure.

The Japanese are either scaring the pants off me, or making me grin from ear-to-ear. Sometimes both. And I love them for it.
Posted by Jay Clarke at 7:45 AM

I NEED NEED NEED to see this! I read the manga and it was amazing. One of my favorite horror reads. It was recommended to me by my fav writer, David Hine, and I was hooked. There were some scenes that were just insane and I cracked up explaining it to my friend.

Here's my review for the book