Hello everyone. I can't talk for long, must play more Dead Space 2. Here's what I've got for ya.

I'll lead with two videos I came across in my Web travels this week. The first is a loving tribute by YouTube user zombiecallum to my favourite puppet, Blade.

The second is an awesome short film by Brian Curtin called Beyond Black Mesa, based in the universe of the video game Half Life.

On this subject, fans of the Call of Duty series should also check out the wicked Frozen Crossing short films by Niko Pueringer & Sam Gorski, by clicking here.

VHS Is The New Vinyl. 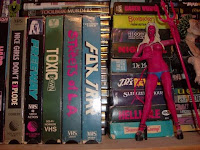 I found this great article from the Boston Phoenix about the VHS movement this week. Writer Michael Neel interviews several people who still have an affinity for the long abandoned format. Here's a snip that beautifully articulates why The Horror Section exists in the first place.

"The search for these hidden gems are part of the allure of collecting videocassettes," (Michael) Monterastelli says: "We're still hanging on to the format of our youth, and we're looking for shit that nobody else has. We go from flea markets to used-video-store bins, sorting through beat-up, dusty copies of former rentals, searching for the really rare, hard-to-find stuff, like nerd archaeologists trying to uncover some buried treasure of ancient exploitation cinema." But the abundance of deep cuts alone is not why horror fans are flocking to VHS - they're also in love with the battered beauty of this analog medium. Many collectors would rather experience a film on a de-rezzed, blip-filled VHS tape than a pristine 30th-anniversary edition Blu-Ray DVD."

That is precisely why I spent an hour in a smelly flea market just yesterday. I did however, come away with a battered copy of Evilspeak for one dollar, so it was all worth it. For the full article, click here.

After Dark Is Nigh.

This Friday marked the release of After Dark Originals. Much like Horrorfest, this is a theatrical run of eight features celebrating independent horror. These include such titles as Husk, Fertile Ground and The Task, but it should be no surprise that the one that most captured my attention was-- 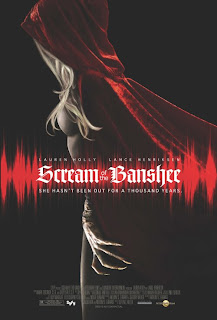 Is it me, or has that Irish spectre had some work done? Since we canucks get shafted from seeing After Dark's wares up here, please let me know if any of this year's crop is worth checking out.


Okay, back to stomping Necromorphs!
Posted by Jay Clarke at 11:01 AM