Thanks to Eyesore Cinema, I got my hands on the newly released Hong Kong slasher Dream Home last weekend. 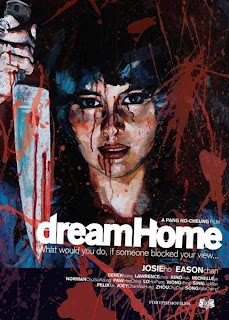 Sheng (Josie Ho) has been saving her entire life to buy her own home with a view of the sea. When the deal falls through, she decides to take matters into her own hands.

Dream Home wastes no time, bursting out of the gate with one hell of an opening. During the title sequence immediately following, all I could think was, ‘if the rest of the movie is like this, then I’m really going to dig it.’

I mean I’d heard Dream Home was bloody, but holy moly there is a staggering amount of over-the-top violence in this. In fact, I don't think I've seen anything on par in that regard since Bustillo & Maury's Inside. I've had other films savage my eyeballs since then of course – Martyrs & A Serbian Film are two that come to mind with a shudder – but there was very little ‘fun’ to be had in those. Dream Home's similarities to Inside don't stop there either. Aside from the unhinged protagonist (or is it antagonist?), neither are professional killers, so things start out well, but get progressively messier as the body count grows. The gore is really well done, with excellent use of practical effects. There is some CG augmentation used with mixed results, but when it works, it works. 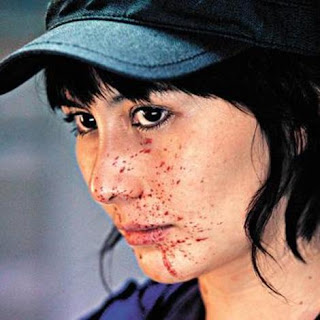 The narrative jumps around a bit, but it isn't too hard to follow. We skip back and forth between the killing spree and flashbacks showing the events that led up to it. Ho-Cheng Pang is a director to watch, as he seems to have a very good handle on addressing social issues in his native Hong Kong. Even when taking the ‘based on true events’ banner at the film’s onset with a grain of salt, it is still plain to see that Dream Home is a comment on his homeland’s housing market woes. Pang’s next film is a romantic comedy entitled Love In A Puff, which explores a relationship facilitated by Hong Kong's stringent no smoking laws.

So, here we are only three weeks into January and I've already crossed off one title on my horrors-to-see-this-year list. If the rest are as gloriously bloody and entertaining as Dream Home was, then 2011 will be a very good year indeed.
Posted by Jay Clarke at 10:08 AM