Going Back To Church.

The Final Girl Film Club selection this month is Michele Soavi's The Church. This was a flick I hadn't seen since my video store days, so I was more than happy to revisit it. 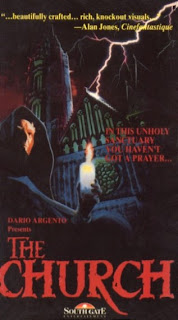 In 12th century Italy, an entire village is massacred after being accused of witchcraft. They are buried in a mass grave and a church is built over it to imprison their souls. Seven hundred years later, the seal is broken, releasing the angry spirits onto the unsuspecting congregation above.

I don't know, I kind of remember this movie being... better. I mean, the story is fairly interesting and the gore is there, as well as the effed up imagery we've come to expect from Soavi, but for me there was something missing. I just didn't find it as clever or as enjoyable as some of his other efforts like Dellamorte Dellamorre or Stage Fright. The biggest thing I had forgotten was just how long it takes to get going. After opening strong, it is a full fourty-five minutes before things are firing on all cylinders again. The hallmark of Italian horror is its set pieces and The Church has those in spades, but it doesn't come together as a cohesive whole for me. 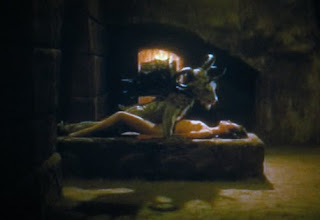 The Church is unofficially known as the third entry in the Demons series of films, but Soavi has denounced that in the past. He had loftier ambitions for his film, than just being a trashy sequel. I respect him for that, but in doing so, I think he may have taken some of the fun out of it. I didn't feel that The Church was as entertaining as either of the first two Demons movies. It was technically superior by leaps and bounds, but more enjoyable? No. The Church spends the first half of the movie introducing us to the dozen or so characters who work there, and then in the last thirty minutes, floods the movie with random tourist chaff to be offed in the blink of an eye. Demons at least, gave us all our characters up front, set them up and then got to knocking them off by the second act. Did you care about them more? Not really. But at least we'd been with all of them for a while. 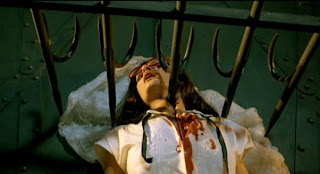 Seeing Asia Argento again at the tender age of thirteen was a hoot, as we all know the smoldering siren she became. The Church is beautiful to look at, has its moments and is unmistakably Soavi, but frankly, I think he's done better.
Posted by Jay Clarke at 10:09 AM

Love The Church. Love it!