It’s funny the things you come upon by complete chance.

Last weekend, I was doing a DVR title search for Michael Haneke’s The White Ribbon and something called Whitechapel popped up in the list. I was obviously intrigued by this and looked it up. It was a UK miniseries about East End detectives trying to track down a modern day Jack the Ripper. Sort of a no-brainer for my attention, wouldn’t you say? By that time the following eve, I had already watched the whole thing. 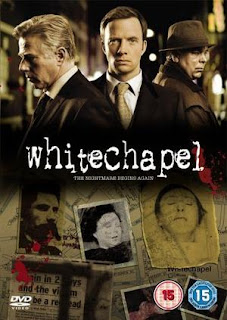 I ended up liking this show very much. I was a little undecided at first, as it did very little to distinguish itself from all the other cop shows cloned from the CSI explosion of the late 2000’s. Stop me if you’ve heard this one. A young fast-tracking, by-the-book inspector gets assigned to an undesirable district looked after by a bunch of rough-around-the-edges detectives. They don’t accept him initially but eventually he earns their respect. Whitechapel’s bizarre visual choices didn’t help either. It was very transition heavy, alternating between blurry, double vision long shots of city streets and shadowy flashes of the original Jack. It was a little distracting, but like my experience watching Burn Notice for four seasons, you just sort of get used to that kind of freaky-deaky editing.

However, for every cliché, there was something engaging about it. I could literally feel myself being won over as it went along. The characters became more fleshed out and I began to like them, especially the salty Sergeant Miles, played by British veteran Philip Davis. To be honest, I am surprised that he’s never turned up in a Guy Ritchie flick. Rupert Penry-Jones is also good as Detective Inspector Chandler. He reminded me a little of Paul Bettany and gave a very layered performance. 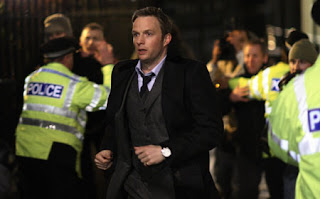 Though, it should be no surprise that what kept me most interested was the investigation of the Ripper copycat murders. There was a real attempt made for accuracy, which I appreciated. Many theories are entertained during, even one I hadn’t heard before. A Ripperologist named Buchan, played with verve by Steve Pemberton, surmises that Elizabeth Stride, Jack’s fourth canonical victim, was a coincidental murder and not a victim of Jack’s at all. I have to say I was a little disappointed that Aaron Kosminski – who I’ve always thought was the most likely culprit – didn’t get a mention though. 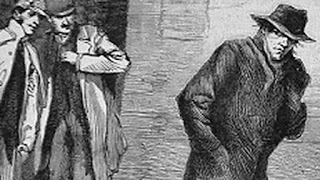 So, all in all, Whitechapel was a very pleasant surprise for me. It appears there was a second season made last year centering around the infamous Krays, so I shall be looking that up, as well. If you are a Ripper enthusiast or just can’t get enough of police procedural dramas, then I recommend you to take a trip to this rough and tumble section of the East End.
Posted by Jay Clarke at 3:08 PM