Hello all. I'm feeling mighty low today, so I'll get right to it here.


A poster surfaced for the Resident Evil movie this week. 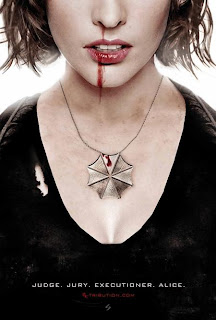 Add this to the awesome teaser released a few months ago, and you can colour me stoked.  Resident Evil: Retribution hits screens September 14th.

Toronto's World Wide Short Film Festival kicks off this Tuesday.  In terms of genre shorts, they are doing things a little differently this year.  Instead of the "Creepy" and "Freaky" programmes, WSFF has formed something called "The Night Shift."  Starting at 1130pm on Saturday the 9th, The Bloor will be hosting four-and-a-half hours of genre shorts spread out over three programs, including festival circuit sensation Bobby Yeah, former Rue Morgue editor Jovanka Vuckovic's The Captured Bird, and the new short from The Quay Brothers, Through The Weeping Glass.  Click here for the full programme.


I regularly look in on the DIY filmmaking podcast Film Riot on Revision 3.  Since its inception in 2009, host Ryan Connolly has produced content for the show while working on his labour of love, a project called Tell.  Well, the last time I looked in he had announced that, after three years and one-hundred-and-ninety-some episodes, Tell was finally done and now online. Here it is below. I think it came out pretty well.  It's kind of long in the tooth for a short film, but there are some genuinely creepy moments here.  Congrats Ryan!

This should help lift your spirits Jason,

You're right, that did make me feel better.