Moving now to across the pond, I checked out Cold Hell, the new thriller from German director Stefan Ruzowitzky. 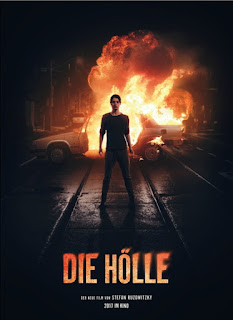 A Muslim taxi driver named Özge (Violetta Schurawlow) becomes the target of a serial killer after she witnesses him disposing of his latest victim.

I loved this film. Thrillers are a dime-a-dozen, but it is rare where all of its components come together as well as they did here. Cold Hell was the perhaps the closest thing to a giallo I've seen in quite some time. It has several elements, including the mysterious serial killer, a protagonist that is unwittingly brought into the investigation and the cat-and-mouse game that ensues.

This time however, the formula was cleverly subverted by flipping the gender roles. Usually, the female is a companion to the main character that helps to a certain degree, but often ends up needing to be rescued (Daria Nicolodi in some of Dario Argento's films for instance). In Cold Hell, Özge was the main character who was not only strong, but also took no shit and never let herself be a victim. It's also important for me to point out that her strength felt well established and organic. It wasn't an empty plot device, her actions were spurred on by years of being trodden on by the world.

Which brings me to Schurawlow, who was just fantastic. I could see the weight of the rage she carried around inside her quiet demeanor. It was almost as if she had been waiting for someone to come along she could unleash all her anger onto. I never once thought Özge couldn't do all of the kick-ass stuff Schurawlow did in this film. On top of that though, there were a lot of other moments like altercations with her estranged family and the socio-political hurdles of xenophobia that really added to her character. Ruzowitzky made a perfect casting choice here I can only hope that Schurawlow's career skyrockets like Franke Potente's did after he put her in his 2000 flick, Anatomy.

Cold Hell was a well paced thriller, but it also had its share of really kinetic action sequences. Özge was a trained Thai boxer and I really liked the true-to-life nature of the fight sequences. They were not the highly choreographed bouts we see from Hollywood and the Far East, but realistic get-them-down-and-hit-them-in-the-face-as-many-times-as-possible affairs. It was extremely visceral and I was super pumped after the credits rolled.


Cold Hell will likely be my favourite film at the festival this year. It was a very well executed thriller anchored by a complex and spirited female lead. We need more thrillers (and lead characters) like this one.
Posted by Jay Clarke at 10:00 AM