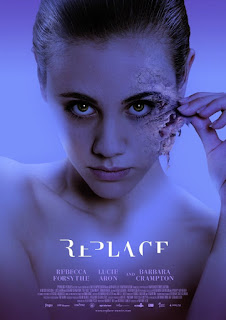 When Kira's (Rebecca Forsythe) skin starts to inexplicably decay and flake off, she discovers she can replenish it with that of other women.

I wasn't crazy about this movie, but I'll start with the positive. I was really impressed with the look of this movie and how it visually represented Toronto. Kira's apartment had this really strange layout that could only exist in a movie and I kind of dug that. Odd at first was the relationship between Kira & her neighbour Sophia (Lucie Aron), actually reminding me of those awkward dubbed conversations you see in old gialli, but even that kind of grew on me after a while. It could also be that Aron reminded me of Asia Argento.

I think scene to scene, Replace just felt uneven to me. I was slightly confused in that it seemed to exist out of time. Kira rocked an ancient flip phone, yet Sophia busted out a futuristic projection screen. As soon as the movie started escalating, it didn't really flow together as well as it should have. A few revelations toward the end helped to alleviate some of my grievances, but not all. I would wager that the more surrealist qualities of the movie were perhaps the contribution of co-writer Richard Stanley, but I was lukewarm on how that mixed with the science here.

Due to these distractions, I didn't feel nearly as connected to the characters as I was supposed to. That's a problem because body horror is all about its visceral nature and response. The special effects were solid, but even with those I often experienced a strange disconnect. Barbara Crampton showed up and gave the project some gravitas, but not enough to anchor the movie down once it started meandering in the middle.

Visually I thought Replace was a success, but I just wish the other elements came together as well.
Posted by Jay Clarke at 10:00 AM