Next up on the Fantasia docket was Graham Skipper's Sequence Break. 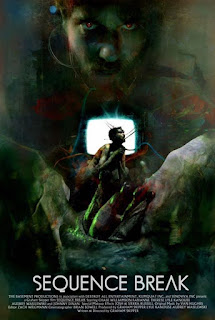 After playing an old arcade game that mysteriously shows up at his repair shop, Oz's (Chase Williamson) hold on reality begins to slip.

Skipper is part of a collective of filmmakers that have made several indie horrors (Almost Human, The Mind's Eye) in the last few years that I wasn't struck by, but this premise was just too intriguing to pass up. I'm glad I did because I liked this one quite a bit. When the instantly recognizable ships from Galaga flashed across the opening credits, I was like, okay I'm in, whatcha got?

If 2015's The Mind's Eye was a take on David Cronenberg's Scanners, then Sequence Break was Skipper's interpretation of Videodrome, switching out VHS & TV's with arcade games. However, I believe that this piece succeeded where the former failed. Even with some Lovecraftian and cyberpunk elements mixed in with the Cronenberg, Sequence Break did not overextend itself past its means. Boasting only five characters and largely one location, it allowed itself to be intimate, yet visually stimulating at the same time. 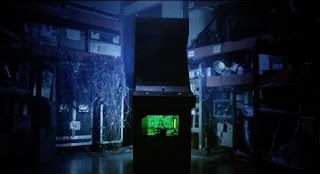 The practical effects (once again recalling Videodrome) were well executed and tactile and the synth score by Van Hughes was perfect. The indie horror scene has been saturated with eighties homages, but this one came off to me, as one of the most sincere. These retro efforts largely tend to rely on nostalgia and while they are often fun, do come off a bit surface-y. In Sequence Break, those aforementioned elements were complimentary, but it was the relationship between Oz and Tess (Fabienne Therese) that kept me invested.

Which leads me to Williamson and Therese, reunited after working together in 2012's John Dies at the End. I thought their chemistry here was fierce and their relationship endearing. Maybe it was just the hope that someone like Tess exists in the world. I'm not necessarily convinced of that. My friend tells me I don't know enough women. Perhaps that is true. All I do know is that Therese is racking up an impressive list of genre credits so a breakout role is surely imminent.


Sequence Break was a solid indie sci-fi romance that is by far the best thing his crew have put out into the world. It rose beyond mere homage where retro-gaming was an entry point, but not the only driving force of the story. If Skipper's compatriots are smart, they will follow his lead going forward.
Posted by Jay Clarke at 10:00 AM