Hello all! I hope you're enjoying your weekend and that sweet spot in between Canada Day and Fourth of July. Here's what I've got for you.


While it is often that I wish I could attend something that is screening in NYC, this takes the torta, so to speak. The Quad Cinema in New York will be celebrating the work of Italian icon Mario Bava in July by playing twenty-one (!) of his classic films.

Kicking off July. the Mondo Bava series also will play other such titles as Blood & Black Lace, Black Sabbath, Bay of Blood, Shock and a new 4K restoration of his seminal sci-fi title Planet of the Vampires. For the full line-up, click here.

I can only pray to any higher power that will listen that some organization in the Big Smoke will bring this series to Toronto. I'm crossing my black gloved fingers.


I have a couple of trailers here, the first of which is for the newest Child's Play movie, Cult of Chucky.


I still haven't seen the one from a few years ago yet, but fortunately a friend is having a Chucky marathon this month so I'll be able to catch up soon enough. Second is the trailer for Black Fawn's newest The Heretics.


Each picture these guys make as part of their eight picture deal with Breakthrough is better than the last and having worked with two of the leads (Ry Barrett & Jorja Cadence) in the past, I am expecting good things. Look for both titles later this year.


Lastly, since I'm still clocking in nightly sessions with Gun Media's Friday the 13th game, I thought this mock-up was particularly awesome. 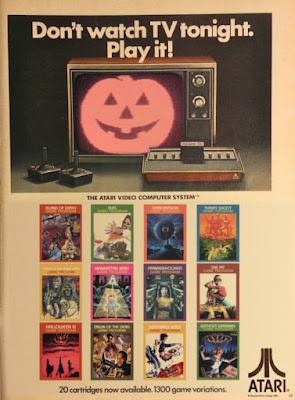 I'm afraid I don't know who is responsible for this, but I like to think there is an alternative universe where these titles actually exist. What a childhood that would be!
Posted by Jay Clarke at 12:25 PM