Starting off my Fantasia coverage this year was a homegrown effort by Sebastien Landry & Laurence Morais-Lagace called Game of Death. 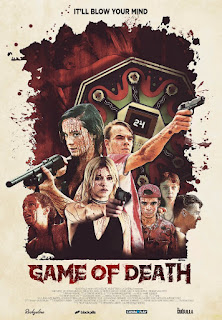 A group of friends unknowingly enter into a bout of kill-or-be-killed after uncovering an old board game.

I'd been looking forward to this title since it played SXSW in March, so I was very glad to hear it was playing Fantasia. Game of Death was a fun ride that basically succeeded on the strength of its premise. It may have leant on it a little too much, but I cannot deny that the game board was one of the most distinctive props I've seen in some time.

Originally envisioned as a web series, I think the creators were wise to cut into a feature, as it works much better as a one-shot. I don't think it would have had nearly as much punch if it had been broken up into bits. As a feature, the mix of traditional and video formats felt a little disjointed, but within the context of the chaotic subject matter I was able to cut it some slack. 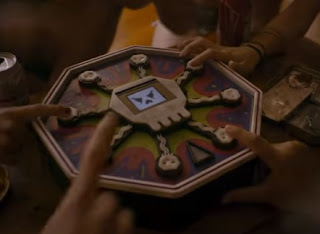 The main draw was the gore and with Rémy Couture at the helm it was premiere stuff. If you like head explosions, then Game of Death is veritable pornography. And the crowd appreciated it I can tell you, even if it did admittedly have a home field advantage. I sometimes forget how much of a blood lust Montreal horror fans have here.

With gaming being a prevalent theme, there were a lot of callbacks to retro gaming, including a neat animated credit sequence. Landry & Morais-Lagace used this technique a few times throughout the movie and though I welcomed it, I don't believe it worked as well as it did at the onset. 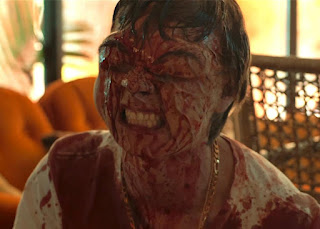 Game of Death would have likely had more resonance if any of the characters were actually likable (Beth, played by Victoria Diamond, was the only one I was invested in and she was no saint), but it was easy to not really give a shit because it was the spectacle that drove things forward. And with a running time of under eighty minutes it didn't have time to overstay its welcome. It did still tend to meander at points, most notably with the inclusion of a Fargo-esque park ranger that began to grate on me, but it never went off the rails.


I was into this film though, only bumping on tiny, inane things like a couple having oral sex while wearing their underwear and the filmmakers not seeming to know (or care) what actually comes out of a shotgun. Game of Death was a simple and fun ride that will satisfy the gore hounds, but perhaps leave the more discerning a little wanting.
Posted by Jay Clarke at 10:00 AM