One of my most anticipated screenings at this year's Fantasia was the new Blue Underground restoration of Gary Sherman's 1972 horror Death Line. 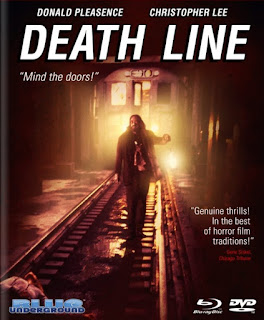 This screening was a treat for a number of reasons. First off, the transfer (which was struck from the original camera negative) was wonderful. Up until this point, Death Line, under its alternate title Raw Meat, was only available through a dark and muddy release from MGM. It was so great to able to actually see the inside of the underground lair during that lengthy tracking shot toward the beginning of the film. Also, Death Line still remains one of my favourite performances by Donald Pleasance. He was clearly having so much fun in this.


The biggest draw of this event though, was that director Gary Sherman was in attendance and sat down with filmmaker Bill Lustig for a lengthy discussion about the film. Here below is audio from that night, where he talks about working with Pleasance & Christopher Lee, the lamented A.I.P. release and exploring subtext within genre film. Enjoy!