We lost a giant, figuratively and literally, yesterday. Filmmaker George A. Romero has passed away after a brief battle with lung cancer. He was 77.

After bursting onto the scene with Night of the Living Dead in 1968, Romero's contribution to film is beyond compare. His debut ushered in a new era, not only for the zombie genre, but also the idea of using subtext within horror. He may not have been the first to do it, but Night sure inspired a lot of future filmmakers to do the same.


Beyond his influence as a filmmaker, his works had an indelible effect on me growing up. Night, Dawn of the Dead and much later Day of the Dead (once I was actually able to find it outside the limited resources of my Toronto suburb) are the pinnacle of zombie cinema, both in terms of special effects and what can be achieved through genre. His leanings toward the bleak carried onto 1977's The Crazies where he gutted me not once, but twice with the death of Lynn Lowry and the zero-hour loss of the cure.


Romero then did what he did with ghouls with bloodsuckers in 1978's Martin with his non-sensationalized portrait of modern day vampirism. Later, Creepshow would run through my VCR more times than I can count and that syringe climax in Monkey Shines still remains one of my most intense memories of watching a horror film. I could go on and on. 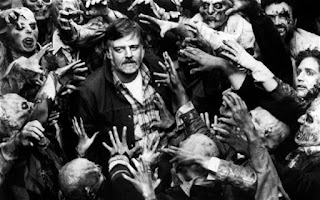 What makes this even more sad is that Romero had made his home here in Toronto. He was a fixture of this community. You get into that frame of mind that he is always going to be there and it is just a matter of time before his next project would be announced. Then he's gone. I am taking some comfort in that we will get more time with him posthumously when his interview with Guillermo del Toro gets released on the newly announced Between Night and Dawn set from Arrow.


Rest in peace, Mr. Romero. Your legacy, much like some of your film subjects over the years, will never die.
Posted by Jay Clarke at 10:41 AM