The Midnight Madness closer this year at TIFF was Don Coscarelli's adaptation of David Wong's novel John Dies At The End. 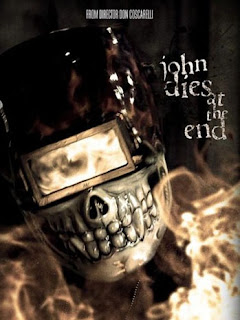 After taking a weird drug called Soy Sauce, slackers Dave (Chase Williamson) and John (Rob Mayes) discover they can manipulate time and reality. Unfortunately, they also find out their world is under attack by inter-dimensional beings, and they're the only one who can stop it.

I can't speak to how successful an adaptation this is, as I haven't read the book, but as a movie, John Dies at the End is a fun ride. It is bristling with originality and unpredictability, which are both valuble commodities these days. I think Coscarelli was a good fit for this material. It is of a similar tone to that of his last feature, Bubba Ho-Tep and the dimensional shenanigans and buddy demon-killer dynamic mirrors his Phantasm franchise. The first-person narrative was no doubt challenging to adapt, but Coscarelli uses it well here.

I have to applaud Coscarelli's choice to cast a pair of relative unknowns in the lead roles. Williamson & Mayes work well together and the former even manages to hold his own in the restaurant scenes with consumate character actor Paul Giamatti. Also showing up in delightful supporting roles are Doug Jones and Clancy Brown, who as Vegas psychic Dr. Marconi is the exact opposite of his other Midnight appearance in Hellbenders.

John Dies at the End is the latest in a popular trend that hit its peak with Edgar Wright's 2004 classic zom-rom-com Shaun of the Dead. There have been several over the last few years, but most have been micro-budget indies only seen by people who frequent underground film festivals. Past titles like The Last Lovecraft, The Revenant and, to a lesser extent, Deadheads all center around friends who encounter the supernatural, resulting in comedic hijinks. It has been a while since it's been tackled by this high profile a genre director though. I like this subgenre, so I hope John Dies at the End gives the movement the shot in the arm it needs to continue.

I really liked the practical effects, provided by gore guru Bob Kurtzman. There were some inspired designs here, especially the meat monster that shows up early in the film. I think the movie overreaches its budget in some of the CG heavy sequences, but, for the most part, the awesome creature designs provide a nice balance to the project.

Even with its reality bending predisposition, John Dies at the End is a well-told story with a solid cast and numerous laugh-out loud moments. Coscarelli owns the material, which ultimately makes me sad that he doesn't spend more time in the director's chair.
Posted by Jay Clarke at 10:00 AM