It appears that the Mexico may be experiencing a genre renaissance of late. Seemingly sparked by Jorge Michel Grau's 2010 cannibal family flick We Are What We Are, we now have two more horror films about creepy kiddies from down south. 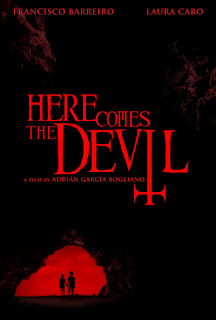 After two young children return from being lost in some nearby hills overnight, their mother starts to suspect there is something not quite right with them.

Here Comes the Devil is a solid genre piece. It is extremely straightforward in presentation, but after some of the more surreal genre pieces I have experienced over the last week, that was kind of refreshing. It plays out much like 1975's Picnic At Hanging Rock, but with none of the ambiguity, which again, I appreciated.

Director Adrián García Bogliano begins his movie with perhaps the best way to get my attention (lesbians!) and goes from there. The performances were good and I felt the stress of the domestic unit under the pressure of the situation far more than I did with the similarly-themed recent Hollywood release The Possession.

The film is built on atmosphere and punctuated with moments of extreme gore, which made sure to keep the audience on its toes. For the most part, the filmmaking was sound, although the almost comical overuse of shock zooms was a little perplexing. It reminded me of some of Mario Bava's works, specifically Kill, Baby, Kill where it was like a kid playing with a new toy.

The other film was Come Out And Play from mysterious Russian director Makinov. 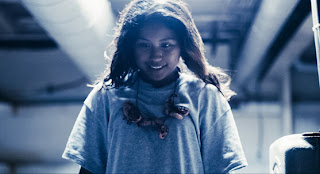 A couple vacationing in Mexico take a day trip to a remote island village, only to find that all of its adult inhabitants have been murdered. It doesn't take them long to realize that the children are responsible and they're next.

If the synopsis sounds familiar, it is because it is actually a remake of the 1976 Spanish film Who Can Kill A Child? In fact, it is an almost shot-for-shot redo, as even some of the sets, are almost exact recreations of their original counterparts. There is very little deviation from the source material, so I'm not exactly sure on what the intent was here. I feel the director would've been better served to take the idea and make it his own, much like Brit Tom Shankland did with his 2009 film The Children. Of course, I'm not sure anyone knows the motivations of this single monikered filmmaker. Oh wait, that's not true, we were shown his “manifesto” before the film.


The lead actors Ebon-Moss Bachrach and Vinessa Shaw (playing a similar character as her role in 2006's The Hills Have Eyes remake) are both serviceable, powering through their characters' more bone-headed decisions. The child actors are all suitably menacing, but at the same time, it's not really difficult to make a child look creepy.

Makinov wore many hats (or should I say masks?) on this production, serving as director, cinematographer, editor, production designer and composer. It is the latter I want to give him full credit for, as the score on this film is spectacular. It reminded me of the moody compositions from François Eudes, and others from the French New Wave of the aughts.

So, there you have it. Here's hoping there are many more horror films to come from our Mexican compatriots.


Makinov footage courtesy of YouBringAHorseForMe?
Posted by Jay Clarke at 10:00 AM