My Kind Of Vamps.

One of the films I was most looking forward to at TIFF this year was Neil Jordan's newest Byzantium. 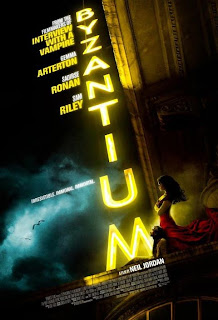 Two-hundred year old vampire “sisters” Clara (Gemma Arterton) & Eleanor (Saoirse Ronan) flee to an English seaside town to start over, after a particular messy kill. However, it isn't long before their past catches up with them.

From that synopsis, you can imagine that this was an easy sell for me, but even I wasn't expecting to like it this much. There wasn't one facet of this film that didn't work for me. I suppose I shouldn't be surprised, as Jordan has already given us two solid “monster” genre pictures in the past with Interview With The Vampire and The Company of Wolves.

Perhaps it is just the sheer skill involved that left me reeling. Byzantium has moments of action and flashes of extreme gore, but at its core remains a dense dual character piece that juggles two time periods. The film smartly skirts several of the more exuberant tropes of the vampire genre, which immediately distinguishes it from the more commercial fare that we've been seeing over the last few years.  It also doesn't hurt that the film is absolutely gorgeous, finding beauty in even the most drab of locations. There are so many frames of this movie that still stick out in my mind.

Ronan & Arterton are fantastic in this film as polar opposites. Ronan expands on a character similar to that of her title role in last year's Hanna, and continues to be able to emote more with just a stare than most actresses can with a full scene of dialogue. I did see shades of Let The Right One In here, but what's tremendous is that section is but one sliver of this delicious cinematic pie. As for Arterton, you can see that she loves playing this character and relishes Clara's more villainous attributes. When her and Ronan are together onscreen, you can see their history. They bicker fervently, their accents becoming more pronounced – which only further proves how well realized these characters are – yet they are the only thing they truly have in this world.

And if that wasn't enough, all the music in the film is elegantly arranged. Byzantium is bathed in classical and choral music that perfectly accentuates that these characters have been around a long time. Ronan reportedly spent three months learning the Beethoven piece she performs in the film. It is this attention to detail that put the film over the top for me. It is like a symphony where all of its parts work together in perfect harmony.

When the credits were rolling on Byzantium, I was really curious to know where this story came from. It had to be from some existing source material, as I couldn't believe that this was written directly for the screen. It turns out that it was adapted by Moira Buffini from her play A Vampire Story. I tip my hat to her for mining so much fresh and interesting material from a stale genre. Byzantium was dense, vibrant and I loved it.
Posted by Jay Clarke at 11:00 AM