Likely the biggest draw at Midnight Madness this year, was Rob Zombie's newest The Lords of Salem. 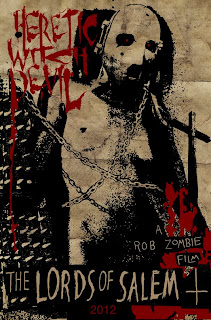 After a late-night DJ (Sheri Moon Zombie) listens to a mysterious record that arrives in the mail, she starts having nightmarish hallucinations that may be tied to a coven of witches executed several hundred years ago.

I was cautiously optimistic going into this film. Even though I have really only liked one of his previous works – 2005's The Devil's Rejects – I wasn't ready to give up on him. It turns out that was a good thing, as I think The Lords of Salem is a huge leap forward for him artistically. The white trash caricatures, profuse swearing and MTV editing that usually populates his work has now been replaced with deliberate pacing and wall-to-wall atmosphere. This is helped along with a great score by Rob Zombie bandmate John 5 – including the droning, trance-inducing centerpiece – and the breathtaking cinematography by Brandon Trost. The latter cannot be stressed enough, as it recalls such classic horror films as The Shining, Rosemary's Baby and The Devils. Hopefully, you can now tell Zombie is striving for more than what he usually gives us. 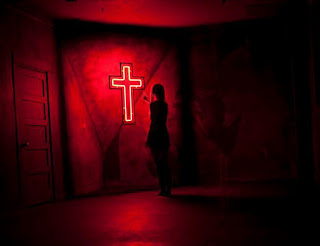 What still remains is Zombie's penchant for casting veteral genre actors though, as they appear here in droves. They include the likes of Ken Foree, Meg Foster, Dee Wallace and Patricia Quinn and are a joy to watch. There were apparently many others that didn't make it into the film like Daniel Roebuck and the late Richard Lynch, so here's hoping those scenes are included on a future DVD release.

While it is true the narrative is paper-thin, it is clear that atmosphere was the priority on this project. To defend myself from sounding like a hypocrite, after basically condemning Berberian Sound Studio for the same thing, all I can say is I felt The Lords of Salem had intent and direction. Zombie's conclusion may not have the punch I was hoping for, but at least he made a clear choice. There were several points where it felt a little fragmented and unfinished, but I was always transfixed by the stunning visuals.

I know a lot of people like to harp on Sheri Moon – even I had a hard time sitting through her portrayal of Baby in House of 1000 Corpses – but I thought she gave a solid performance here. Far from her usual shrill and abrasive demeanor, Heidi is much more restrained and unassuming, and it suited her.

Though I may have liked The Lords of Salem more for what it wasn't, than what it was, this is a step in the right direction for Rob Zombie. I am now kind of excited to see what he does with his next project, the seventies hockey flick, Broad Street Bullies.
Posted by Jay Clarke at 12:44 PM

Don't take this as a knock against you, but as someone who generally likes the horror genre and most of the films you see, it's a bit odd that you have problems with Zombie's movies. I'd figure they'd be something you'd like for the most part?

As far as John Carpenter remakes go what he did with Halloween was much more than I expected.

You'd think so, wouldn't you? House of 1000 Corpses was a hot mess, but Rejects I liked. The Halloween remake really bothered me. The back story was unnecessary and took away from the mystique of MM. The last half was watchable though.

I had to chuckle when I saw your handle, Tom Servo is the name I used while writing for DVDWolf back in the day. Nice to hear from a fellow MST3K fan.

You always make me jealous with the film festivals you go to. Always enjoy reading the review though. Gives me movies to be on the lookout for. Thanks for taking the time to review each film.

And thanks for taking the time to read them! It's always great hearing from you Heather. Hopefully one day, I'll make it down there for Fantastic Fest.

I totally agree with you on zombie's directorial attempts....although anyone who takes on a carpenter remake has huge shoes to fill. I didn't no couldn't make it through the Halloween remake and I think I was drunk. The first time I saw house of a 1000 corpses I woke up in the middle of the night with a pounding headache and I was sober for that one. Although I've come to appreciate it and I love harping on moon she makes me crazy. I could harbor some catty jealousy. Then there's rejects holy hillbilly heaven! That shoot out to free bird was too much for me, but there's one universal thing that I have come to appreciate in zombie flicks; the visuals and the scores. And if Moon is a bit restrained I think I'll give this one a whirl...and due to your review the evil dead isn't the only horror movie i'm looking forward to this spring.