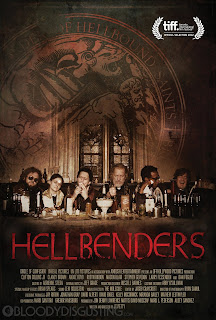 When an ancient demon plans to open a portal to hell, a group of ex-communicated priests working as exorcists-for-hire may be the world's only hope.

Petty has shown that he is a versatile director. Over the last decade, he has given us a creature feautre with Mimic: Sentinel, a chilling faux doc with S&Man, and the period western The Burrowers. Hellbenders is his stab at the horror comedy.

This was a reasonably good time, but as a film it's pretty uneven. The tone seemed fragmented throughout, which put the direction in question at points. This wasn't helped by the weird “talking head” interview segments that pop up from time to time. I get the random demonic possession bits, as they had to do with a contest run through Bloody Disgusting, but the interviews didn't really gel with the rest of the narrative at all. 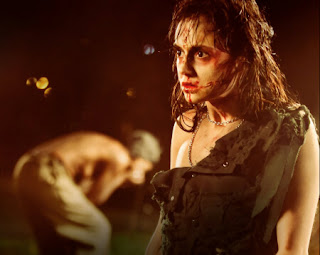 The film's strong points were its concept and cast. The idea of a group of rogue exorcists that actively live a life of sin – if they cannot exorcise a demon, they'll invite the demon into their worthy vessel and take them both the hell after committing suicide – is pretty ingenious. It was the first half of this movie, where we saw their day-to-day, that was the most enjoyable. In fact, I don't think this movie would've worked at all if it didn't look like the cast was having so much fun. Clancy Brown was fantastic as Angus, spewing more vitreol and “cocksuckers” than an episode of Deadwood. The “moral” center of the group, played by Clifton Collins Jr. was also great, with some of the best lines of the piece. I'd also like to say that the effects work was well done, as the various demonic designs looked great and translated well onscreen.

As well as the 3D looked in Hellbenders, I don't think it was really necessary. It didn't particularly enhance the movie experience – certainly not like it did with Dredd 3D, which I saw a few days earlier. Of course, it didn't help that the glasses they hand out at the Ryerson Theatre were some of the most uncomfortable I've ever worn.

Hellbenders had its moments, but lacked the substance I was expecting from such a juicy premise.
Posted by Jay Clarke at 11:38 AM