The Sound Of The Surreal.

Yet another film in the TIFF Vanguard program I was chomping at the bit to see was Peter Strickland's Berberian Sound Studio. 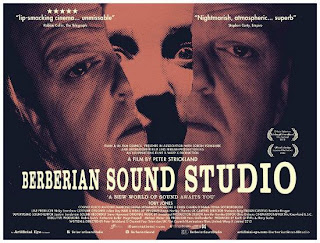 A soft-spoken sound engineer (Toby Jones) gets more than he bargained for when he travels to Italy to work on an film directed by eccentric director Gianfranco Santini (Antonio Mancino).

The director's intent with this film was to merge art house with exploitation, but it's definitely the former that is the predominant force here. The emphasis on using sound to tell the story – at least for the first two acts anyway – was a very bold decision, but Strickland handles it beautifully. I was pulled in by the inner workings of sound engineering and the attention to detail was almost overwhelming. Jones does a great job portraying a man out of his element, both geographically and artistically, and the colourful characters around him – which include Cosimo Fusco as the detestable Francesco and future Bond girl Tonia Sotiropoulou as the acerbic receptionist Vera – do nothing to dissuade his unease.

Unfortunately, by the hour mark, Berberian's narrative cracks start to show. Its unflinching ambiguity is its downfall, though I imagine the art house crowd will likely feel the opposite. I had a similar problem with 2009's Amer, but at least that was an anthology of sorts, so there were storytelling shifts by design. I don't mind the esoteric and I can forego narrative, but you have to either eventually go somewhere with your story or give me something that captures my imagination. Take David Lynch, for example, who I feel always knows what he's doing. His work comes from dream logic, so it's just a matter of deciphering symbols and non-linear constructs. I don't feel Strickland had a clear-cut conclusion for this film, and that frustrates me. I suppose I could just interpret the last act as an overworked man's fever dream, but that is incredibly clichéd and would sell the film short.

The other thing I found myself thinking during the film was that I'd rather be watching the picture they were editing. The credit sequence and audio violence depicted in The Equestrian Vortex were the stuff that would make the likes of Dario Argento and Lucio Fulci proud. It reminded me of my experience with 2009's The Hills Run Red, where the trailer shown up front was infinitely more interesting than the movie wrapped around it. 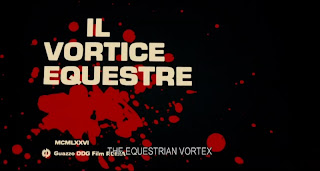 I'm sad to say I was disappointed with Berberian Sound Studio. It was chock full of the strange and surreal, with sound design that was to die for, but by the end I was left wanting.
Posted by Jay Clarke at 10:43 AM