After being part of the “T” competition last year, I was extremely excited that Drafthouse Films' uber-anthology The ABC's of Death had its world premiere here at Midnight Madness last Friday. 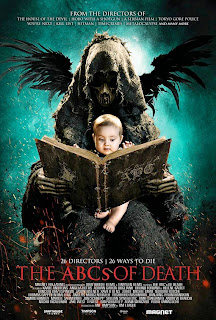 The ABC's of Death was a passion project started by producers Ant Timpson and Tim League. They brought together twenty-six of the hottest genre directors and had them each film a four-minute short tied to a designated letter of the alphabet.

I thought the ABC's of Death turned out well. It was pretty consistent with only a few duds in the bunch. I was also surprised that for being over two hours long, how quickly it went by. I believe we were past the halfway mark before I even realized it.

I think there were about a dozen I really liked, but the real standout was “D is for Dogfight” by Marcel Sarmiento. I thought it topped the roster by a fair margin and that's coming from someone who detested his feature Deadgirl. Dogfight was superb and slick filmmaking where not one frame was wasted. 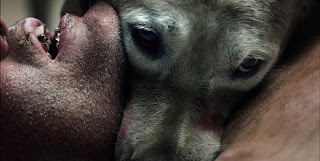 Visually, I also dug Ben Wheatley's (whose newest Sightseers also played TIFF this year) “U is for Unearthed” and Bruno Forzani & Helene Cattet's “O is for Orgasm”, even it did just look like extra footage from their debut Amer. The winner for best concept would likely be Kaare Andrews' “V is for Vagitus.” It was also one of the few that actually looked like it cost the alloted five thousand dollars to produce. I was also glad to see that contest winner Lee Hardcastle's “T is for Toilet” ended up being one of the strongest in the bunch. There's something very satisfying about the people's choice being able to stand toe to toe with the elite. Here below, is footage of the Midnight Madness festivities, shot by my friend Robert Mitchell.


There were sadly some lowlights, as well. I won't dwell on them, but it was clear that a few filmmakers (namely Ti West and Andrew Traucki) took the money and ran, likely shooting their paper-thin concepts in an afternoon. It's a shame, but hey, if they can live with the embarrassment of being stacked up against everyone else's superior submissions, then more power to them.

The ABC's of Death was a fun experiment that included a public element which inspired a lot of filmmaker camaraderie. Not bad for a little idea that came to Timpson after reading a bedtime story to his kids. It just goes to show you that sometimes the grisliest ideas come from the most innocuous of places.
Posted by Jay Clarke at 10:00 AM

Hey thanks a bunch for the review.. one typo tho.. Ant Timpson not Phillips.

Fixed! Thanks for the heads up.

What do you make of Srdjan Spasojevic's entry R?