I'll start my long list of festival reviews with Ryuhei Kitamura's No One Lives. 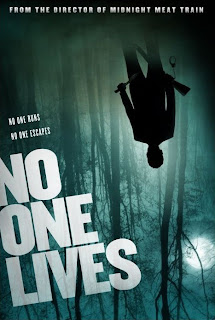 When a gang of criminals (headed by Oz's Lee Tergeson) run a couple off the road and steal their car, they later discover a kidnapped heiress (Adelaide Clemens) in the trunk. She quickly explains that her captor (Luke Evans) is a dangerous psychopath who will kill them all. Sure enough, he soon comes calling.

No One Lives is a strange balancing act. It has a very intriguing setup and premise, but there were several things I thought worked against it. I found the dialogue was really clunky, and some of the performances suffered because of it. Though the idea was sound, I felt the relationship between Clemens and Evans a little muddied. They were both solid in their roles, especially Evans as Driver, the stoic killer, despite the fact that his almost superhuman abilities were never really explained. These are all things that, singularly, could've been overlooked, but all together added up to a degree I could not ignore.

However, the two people responsible for keeping this from being a painfully average B-movie are Kitamura and makeup effects artist Robert Hall. Hall's gore work is always exceptional, so it was not surprising that when the film peaks, it is usually due to something he has splashed onscreen. No One Lives shares several similarities to Hall's own film series Laid To Rest, although this movie is nowhere near as mean spirited. Kitamura's wonderful eye is again on display here, with inspired camerawork and a gritty aesthetic that fits the setting well.

While evaluating No One Lives, I was initially confused as to why I did not enjoy this as much as I should have. On paper, it has all the staples of something I would be on board with, as well as a delicious little twist on convention, so what gives? After thinking about it some more I came to the conclusion that had to do with tone. Kitamura has a very over-the-top style which I find better suited to his more supernatural outings like Versus and Midnight Meat Train. Though No One Lives inhabits a more heightened reality than your average slasher, it is still reality and it took me a long time to clock into the ridiculousness of the piece.

In the end, No One Lives is a fun gorefest, but you have to make a conscious decision to just “go with it”. I do think that Kitamura is a good fit for WWE Studios though, as he brings copious amounts of skill and class to the table.
Posted by Jay Clarke at 12:11 PM