The last film I took in from at year's TIFF Vanguard series was Aleksander L. Nordaas' Thale. 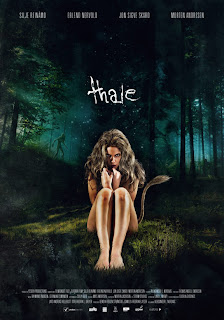 While on a job cleaning up a remote cabin, Elvis (Erlend Nervold) and Leo (Jon Sigve Skard) stumble upon a hidden chamber inhabited by a “huldra”. Before they can even wrap their heads around their discovery, something even more dangerous comes calling.

I quite liked this little film from Norway. While I admit that a good chunk of my admiration comes from what the filmmakers managed to do on a micro-budget of ten thousand dollars, there are other things I really dug about this piece, as well. The production design was excellent and the various gadgets seen throughout the film looked they actually worked within the universe – and weren't just culled together from stuff found in a junkyard which I later learned was the case.

The three leads interacted well with each other, especially Silje Reinåmo as the title character, Thale. It must have been physically demanding role and she pulled it off beautifully. Like many non-human characters in genre films before her, Reinåmo was able to convey much without dialogue and convincingly straddled that line between angelic and deadly.

Scandinavians have such a rich lore, so it is always great to see it mined for theatrical effect (like 2010's Troll Hunter) and Thale is a wonderfully modern interpretation of one of their most common stories. The film was also complimented with an ethereal cello-based score which created a nice bridge between reality and myth.

I had been warned about the bad CG in the film, and it was troublesome, but I've seen worse and it wasn't as predominant as I was led to believe. I'd have preferred a little more restraint to fit their budget, but it surprisingly wasn't a deal breaker for me.

At seventy-some minutes, the pace was brisk and didn't overstay its welcome. Thale is a solid fairy tale made flesh, and it is clear that Nordaas already possesses the storytelling skills of a seasoned pro.
Posted by Jay Clarke at 10:00 AM

Spectranet. Now that's a name I haven't heard in a long, long time.