I think you may have figured out by now that I adore Asian chicks that kick ass. So, that being said, it would be uncharacteristic of me not to mention the awesomeness of the Midnight Madness closer Chocolate. Oh boy, did we all have a fantastic time last night. 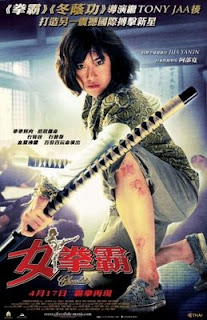 This screening of Chocolate was Prachya Pinkaew's triumphant return to Toronto after premiering his film Ong Bak here in 2003. While Ong Bak introduced us to Tony Jaa, Chocolate gave us a first look at new Muay Thai master Jija Yanin. Yanin was unfortunately not able to attend, but did introduce the film via a pre-recorded video. It is safe to say that I was crushin' on her pretty huge almost immediately. Cute, and deadly. What a combination! Like Tony Jaa before her, Yanin is a revelation. At only twenty-three, she already performs like a seasoned martial arts pro. Seeing her cut through waves of baddies is like watching poetry in motion. She may not have the brute force of Tony Jaa, but her grace and speed more than make up for it.

Pinkaew's down and dirty style has not left him, as evidenced in the end credits outtake reel - which included an accidental kick to the head that split Yanin's eyelid. This production was an exercise in hard knocks, with each sequence more elaborate and culminating in a huge chase up and down the side of a four-story building. Man, just typing this makes me want to see it again! 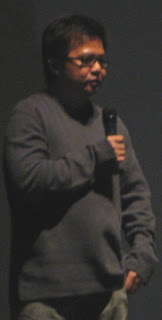 Chocolate is a rip-roaring time, filled with amazing fight set pieces that are so engaging, that the movie's end seems to come in the blink of an eye. But don't just take my word for it, check out the trailer below.

Oh. My. God. I just thought of the ensuing mushroom cloud of bliss that would happen if Pinkaew ever managed to get Jaa and Yanin in the same movie together. Fingers crossed.
Posted by Jay Clarke at 10:44 AM

btw, your kick and ass links SO don't work :P