Blood On Your Popcorn

Since My Bloody Valentine week won’t truly be over until I review the new DVD release (hopefully this Friday), I submit to you this semi-related review. This one has stuff coming out of the screen as well, but things decidedly less harmless than 3-D effects. Check it out. 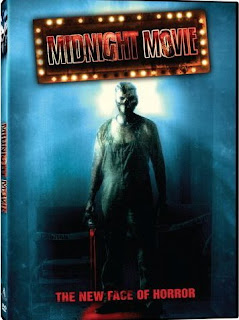 A group of theatregoers, taking in an old seventies-style horror flick, suddenly find they are being offed by the killer from the movie. Inexplicably locked inside the theatre, they must fend for themselves, or end up like their onscreen counterparts.

I had been looking forward to Midnight Movie for a while and it finally released on DVD last month. It’s a great idea, but ultimately falters a bit in its execution. I’ve definitely seen the movie-within-a-movie device handled better in films like Anguish, but what you do get is still a pretty fun slasher. Creators Jack Messitt & Mark Garbett of obvious horrorphiles, as the movie sports numerous references to the era it is aiming to emulate. I counted no less than six such shout-outs without even batting an eyelid – NOTLD, TCM, Psycho, NOES, Alien, plus a little kid who I’m sure was supposed to be Tommy Doyle. 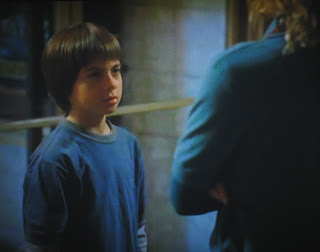 This isn’t a knock however, as it was actually kind of fun seeing them pop up. I think a drinking game is in order! The killer’s mask and design were pretty cool, even if he was toting around one of the most impractical weapons ever used in a slasher. 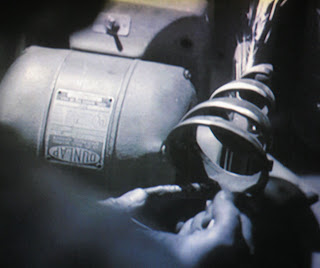 I’m still not really sure how that works exactly.

The gore effects are well done and apart from a few shots here and there, they are top notch. Lastly, I have to say I was quite taken by cutie Rebekah Brandes, who plays Bridget. After looking her up on Imdb, it looks like she has clawed her way up from some pretty questionable fare that even I am in no hurry to seek out. You go girl!

Midnight Movie is a worthwhile venture that mostly succeeds in capturing that ol’ slasher feelin’.
Posted by Jay Clarke at 9:57 PM