The Night The Lights Went Out.

You ever have a night where things are going so well and just before the perfect climax, it all goes to shit? Well, allow me to relate to you my lament.

As I’ve been saying all week, I was super stoked to be taking in the original My Bloody Valentine in Toronto. I mean, look at this event! 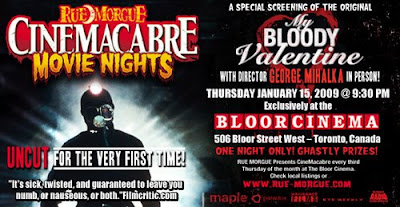 Screening uncut for the first time with director George Mihalka in attendance! After picking up my ticket for Friday’s 3-D screening of the remake at the theatre by my house, I have a surprisingly smooth drive into Toronto. My first stop is my new favourite independent video retailer, Eyesore Cinema. I stroll in with a big smile on my face.

I am early, so I kill some time at the pub across the street from the Bloor. I sip from my pint of Moosehead (to properly prime for the Nova Scotian slasher I'm about to watch), while catching the extremely rare occurrence of the Leafs dominating on the TV above the bar. Inside the theatre, I meet up with a couple of buds and we shoot the shit while waiting for the event to start. A friend turns to me and says,

“Did you notice Edgar Wright?”

I look over and see Wright (Shaun Of The Dead, Grindhouse’s Don’t! trailer) standing a few rows up, looking very inconspicuous in a coat and black toque. Crazy. He’s here in town doing prep for his upcoming project Scott Pilgrim vs. The World and is eager to see Valentine as much as everyone else. The director George Mihalka comes onstage and is visibly touched that his twenty-eight-year-old movie has filled the house. He looks as excited as anybody to see it screened in its original form. The lights go down. The trailers start. Everyone is having a blast. Then…

The screen goes dark. The emergency lights come on. The theatre manager is running around trying to find out what’s going on. Someone says the power is out on the entire block. It must be the cold. I haven’t mentioned this enough, but for the last week or so; I’ve been meaning to post THIS 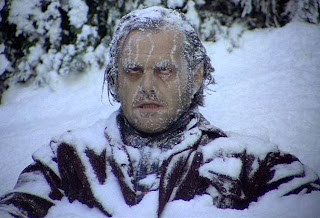 with some sort of sarcastic caption. It’s been excessively cold here, in all of Canada. I know, ha-ha, it’s Canada, igloos and dogsleds and all that shit. But seriously, we’re breaking records. Global warming my ass. Al Gore can suck it.

After a pause, moderator Richard Crouse decides to do the Q&A, while we’re waiting for more news. Mihalka returns to the stage, along with second unit director Ray Sager (?) and actor Neil Affleck, who played Axel in the movie. Mihalka talks about how the MPAA were exceptionally hard on My Bloody Valentine when he submitted it. His intention was to get away from the “Ken & Barbie” type slashers and really make the gore look painful and not like a sideshow. This caused the censors to be merciless, cutting and hacking up the film, like a proverbial Harry Warden. Mihalka says the final theatrical cut of the movie was more like “My Anaemic Valentine.” Crouse points out that the assassination of John Lennon happened just before that and led to a backlash against violence in media, which did not help the movie’s case either. Mihalka starts talking about some of things that have made MBV stay relevant, when we are told that we all have to evacuate the theatre. Out into the –20C cold. The night is over. A friend has the new uncut DVD with him, so we decide to go to a friend’s place to watch it. The night may be salvaged, after all. The only problem is that he lives fairly close and HIS power is out, too. It is just not meant to be.

Winter and I are officially at war. You can be cold all you want and make me shovel and scrape daily. I can begrudgingly handle that. But, last night, you fucked with my movies. Now, it’s personal. I know I’m being overdramatic and things could be worse - I COULD be a Palestinian in Gaza - but all I'm saying is that to have something you’ve been looking forward to snatched away at the very last second like that seems really offside.
Posted by Jay Clarke at 12:18 PM

And thank god, I don't live on the bloor west line. My power kept me warm all night :)

PS. Rachael's friend Andrea got the job working with Edgar on the music for the movie...remember me telling you about that?

That's great news!! Wow, she must be ecstatic!