Brad Anderson is a director that came to my attention in 2001, when I first saw his creepy-as-hell horror flick Session 9. He then followed that up with the dark and moody thriller The Machinist in 2004. Anderson currently works outside the mainstream, producing his films overseas – the last two partnered with Spanish company Filmax (which also brought us one of my current horror faves REC). The by-product of that partnership is that his films are often not released here theatrically. The Blu-ray for his newest film Transsiberian is now available and is this month’s Non-Horror Selection. 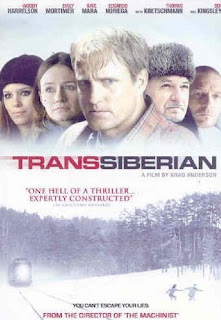 Roy (Woody Harrelson) and Jessie (Emily Mortimer) meet young couple Carlos (Eduardo Noriega) & Abby (Kate Mara) while on a train travelling through Russia. When Roy gets left behind at a stop, things get a little more complicated for Jessie when, after a disastrous event, she catches the attention of a local detective (Ben Kingsley).

I have to say that I found writing a review for Transsiberian a little bit more difficult that usual. I enjoyed it a lot, but it didn’t really pack the punch I was hoping for. The film had several plot points that seemed a little hackneyed to me. It may be that I was just expecting something else, as it appears that Anderson is getting away from the horror genre and exploring other avenues. I don’t have any problems with that, per say, I was just surprised. What I most want to point out about this movie are the visuals. Transsiberian has some exceptional cinematography that absolutely sings on Blu-ray. 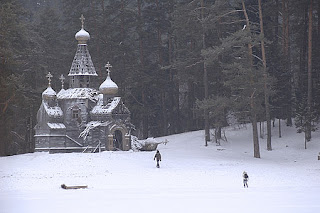 The cool, crisp long shots of the Russian landscape will have you reaching for your coat. And speaking of eye candy, who is this Kate Mara?! I mean she is just smokin' in this movie! 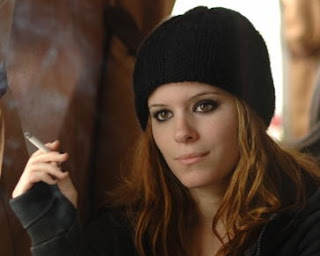 I think I fell for her almost instantly – maybe I'll have to seek out Urban Legends 3 now, or Shooter for that matter – which made some of the events later on in the movie all that more unpleasant.

Sorry, I was thinking about that Shooter image again. Ummm… the rest of the cast is solid and is another reason why the movie is much better than its script.

Transsiberian is a film that really benefits from its locale. It’s a fairly standard thriller, but the foreign environment creates a tension that wouldn’t be there otherwise. I would definitely urge you to seek out the Hi-Def version if you want to check out a beautifully shot film that is off the beaten track.
Posted by Jay Clarke at 5:20 PM