I hadn’t watched CSI for a while because I guess I’d sort of got out of the habit of DVR-ing it. Maybe it was getting a little stale; maybe I was miffed they got rid of Jessica Lucas, who appeared in a few episodes as newbie Ronnie Lake (as a replacement for Jorja Fox - they ended up bringing in Lauren Lee Smith instead though). Last week was the big Grissom’s exit episode, so I tuned in for that (which also had an appearance by Katheryn Winnick) and got hooked in again.

So, Langston (played by new cast member Laurence Fishburne) and Adams are searching this teenager’s room for stolen property and what catches my eye? 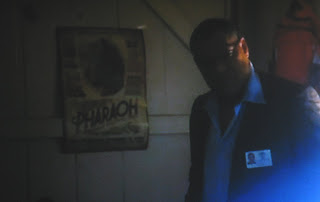 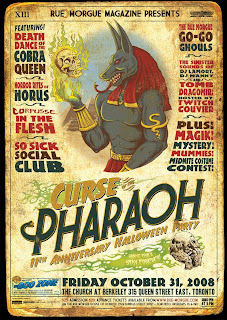 There’s Rue Morgue stuff plastered all over the walls. 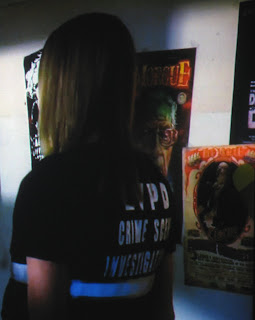 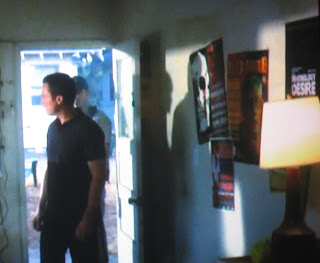 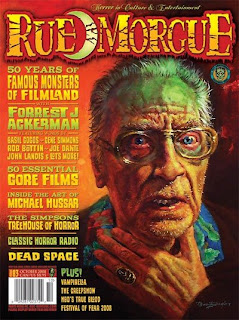 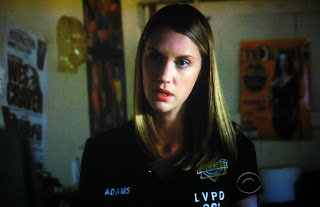 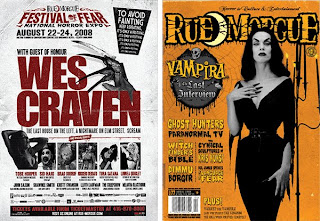 I’d be interested to know the story behind this. Was it a situation where the set dressers were like ‘okay, we need stuff for the walls… let’s make the kid into horror, someone go online and get some.’ Was Rue Morgue the first thing that came up in Google? I find it funny because a lot of these posters (the FOF’08, the Pharaoh party) are for events in Toronto that this character, being in Vegas, would have likely not attended. Regardless, it is pretty sweet to see Rue Morgue exposed to a larger audience. I know that over the last decade RM founder Rod Gudino has built himself a sizable media empire, but to me Rue Morgue is still that little Toronto magazine that could. I’ve been seeing these guys at the same events for years and most of them are pretty cool cats.

It was just a nice little surprise that added an extra element to my evening.

The show actually contacted us and we provided them with those posters. We had an idea they were going to be used in some demented kids bedroom, but that was okay with us!

Back in the day, Fangoria would have been the first choice for something like this, but looks like RM has left them in the trash heap of horror has-been history!

a TV show! Fango has been used for yrs and rue Morgue is light yrs of that crappy mag!

Cool, thanks for clearing that up!

Was this the episode with K'Sun Ray from Fido? (love that movie)

Yeah vivi, that's right, he played the kid whose room they were searching... and Tony Starke (from Return Of The Killer Tomatoes!) played his father.

Well, the good news is, the kid was not only not demented, he was a caring-if-misguided kid who was trying to help his mom to beat her drug problem. OK, he was holding her stolen stuff, but not because he was a bad kid at all.

Its nice to see a kid who likes horror and yet is not a disrespectful emo kid or murderous goth.