As you know, things happen in the world of horror daily, but having a day job doesn't really give me the luxury of commenting on said news as much as I'd like. So, what I'm planning on doing from now on is picking out a few stories from the week and then throwing out some thoughts over my Saturday (or Sunday) morning cup of Orange Pekoe. Give me some time and I might even come up with a cool name and/or header for it. Okay, let's get into it, shall we?

A New Doc On The Horizon.

First, while digging around Imdb last week, I came across this really interesting project called Into The Dark. It appears to be a UK documentary examining horror films, executive produced by George A. Romero and directed by Johanna Salomäki and Paul McEvoy. There doesn't really seem to be much info about it (except a tiny blurb on the Jinga Films website), but what struck me was the super impressive lineup of interviewees. In addition to Romero, Into The Dark also features horror icons Dario Argento, Clive Barker, Tobe Hooper, Stuart Gordon, Bill Lustig, Guillermo Del Toro, Tom Holland and Mick Garris. The doc also has its share of up and coming talent like Jaume Balagueró (REC), Adam Green (Hatchet), Joe Lynch (Wrong Turn 2), Scott Glosserman (Behind The Mask) and Gregg Bishop (Dance Of The Dead). And, as this is a UK production, the Brits are heavily represented by filmmakers such as Neil Marshall (The Descent), James Watkins (Eden Lake), Christoper Smith (Severance), Simon Boyes (Broken), Adam Mason (The Devil's Chair) and Jake West (Evil Aliens). I could go on. The release date is slated for this month in the UK, so hopefully this appears on our shores sometime soon.

Okay, You Have My Attention.

Second, Schwartz sent me an email yesterday telling me the trailer for the Last House On The Left remake was now online. I remember Craven talking about it during his appearance at FOF last fall, but I was still lukewarm about it. After watching the trailer though, I have to say... it doesn't look too bad. Apart from maybe showing too much - a common crime these days unfortunately - it looks pretty decent. And that Sweet Child Of Mine cover...

What do you think? First The Hills Have Eyes remake; now this. Is there something about Craven, that is just adaptable? The original Last House was a punishing film and there are flashes in this trailer that look like it might approach that. Obviously, with the censors being what they are these days, that is a pipe dream, but it leaves me no less intrigued.

And lastly, here's something funny I discovered about The Unborn marketing campaign. The International poster is far more 'stimulating' than the domestic one, wouldn't you say? 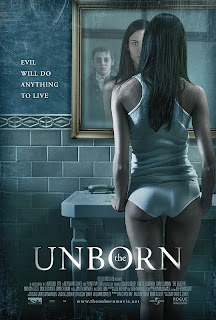 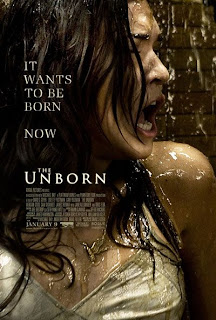 Oh and btw, I have a friend who went to a press screening and said The Unborn was mediocre, at best. And Gary Oldman is in it for twenty minutes, tops. Congratulations, Michael Bay, to another job undone.

So, that about does it for now. Next week, I'm doing something special, so look out for the announcement on Monday. Have a good one!

Is there something about Craven, that is just adaptable?

Great idea man, not much of a stylist. Every now and then he directs the living shit out of something--NoES & Scream were about as good as horror movies get--but he's usually workmanlike at best. Last House and Hills actually benefit from their lack of a directorial signature.

Every time I watch New Nightmare I'm amazed at the distance between how good it is on paper and how it plays. It's leaden and the dialogue is just excruciating in parts. If he had stuck with producing and let a new kid with something to prove helm that sucker, I bet it would've taken its rightful place in the culture as the first meta-horror film. Again, Scream's wonderful, and I'm glad Craven still gets credit for that seismic shift in the genre, but New Nightmare's just so much more ambitious.

That's a really great point, I never thought of it like that.