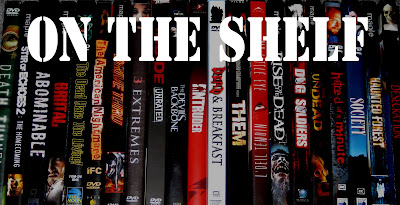 Toby Wilkins’ Splinter was a flick that had been on my list for quite some time and I finally got to check it out. It just came out on DVD and that qualifies it as this week’s On The Shelf. 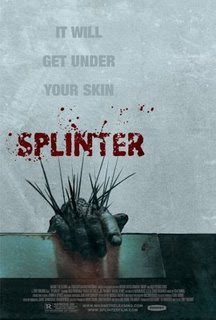 Seth (Paulo Costanzo) & Polly (Jill Wagner) have their camping trip plans altered when they are taken hostage by a couple on the run from the cops. When they all take refuge at a gas station, they find that there is something deadly lurking in the nearby woods.

Splinter is a cool horror yarn. Even though it has an extremely simple plot with few characters, there is something very fresh about it. It is full of clever ideas and serves up some tense moments. It does borrow liberally from classics like The Thing and The Blob, but they are stirred up enough to make those ingredients their own. What makes Splinter most worth watching is the nasty antagonist. It is a strange parasitic organism that infects you with its porcupine-like spines, yet there’s never really much explanation given as to what it actually is. I mean, you can speculate based on the info presented, but it’s never really spelled out for you and I kind of like it that way. 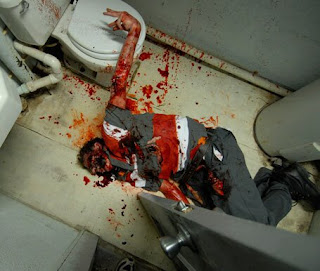 Someone's having a bad day.

Unfortunately, you never really do get a good look at this very fascinating creature and that leads me to my only negative point about the movie – its obvious budget constraints. Now, I don’t mind a slow reveal when you are pinching pennies, this worked well in flicks like Rogue, but you eventually SHOULD show it. Splinter’s reluctance to actually focus on its creature gets more frustrating as the movie goes on. This is a small gripe. It’s a really cool frickin’ monster (just the way it moves makes you do a double take and say ‘whoa, what the fuck IS that thing?’) and a lot of the gore effects are well executed. The quick cutting would have been a bigger problem if the rest of its parts didn’t fit together so well. I found it was well acted, with the just the right amount of set-up. It reminded me of Mulberry Street in that regard, where solid performances and character development elevated it beyond its budgetary shortcomings. The actors/characters in Splinter are fully invested and that makes some of the more borderline laughable effects (Costanzo wrestling with a severed hand comes to mind) easier to accept. And, I’m still not sure why, toward the end, one character was walking around almost completely oblivious to the fact he had lost his arm in the second act. Again, small gripes.

Splinter is a great little movie and well worth checking out.
Posted by Jay Clarke at 7:22 PM