As you know, the My Bloody Valentine remake releases on Friday in glorious 3-D. The third dimension in film (as we know it currently anyway) has been with us for over fifty years now and I was fortunate to be a child when it had a revival in the eighties. Isn’t it funny that the majority of 3-D flicks back then were genre titles? Except The Stewardesses* of course, which I’ve seen screened in 3-D and it is as every bit as tremendous as you would expect three-dimensional boobage to be. Anywho, this Coverbox Wednesday, I’m featuring the ones that I had at my video store, as well as a few others that applied attention-grabbing techniques. I wish I could do some cheesy 3-D effect for you right now, but sadly, I am without pancakes and syrup at the present time. 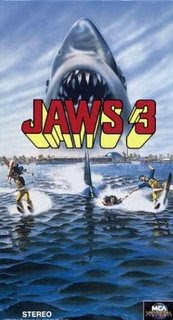 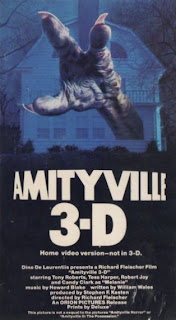 That last one I caught downtown in 3-D about five years ago and it was an effing blast. I mean I’d seen the 2-D version a million times as a kid and didn’t really realize just HOW MANY gags were in it, until they were coming out of the screen at me. There’s apple-juggling, popcorn popping, yoyos… err… yoyo-ing, you name it. If you ever get an opportunity to catch this in 3-D, do it! 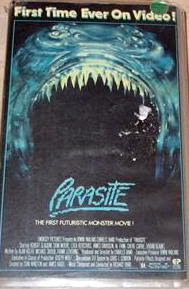 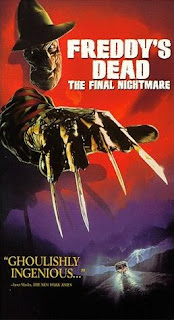 The climax was in 3-D, and I still have the Freddy’s Dead glasses to prove it. This movie came out in 1991, during a time when I was seeing restricted movies at the Drive-In because it was a lot easier for my older brother to sneak me in that way. I saw quite a few movies like that, the best of which being The Silence Of The Lambs. As for Freddy 6, I think we may have been too far away from the screen that particular occasion because I don’t recall the Nightmare 3-D sequence working too well. I never complained though, I mean I wasn’t even supposed to be there, right? 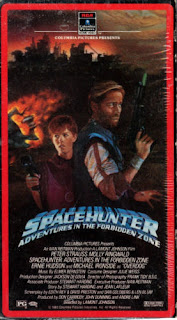 Okay, okay, that one isn’t horror. But I HAVE to mention it. I hadn’t thought of this movie for YEARS and I only remembered while I was fact checking for this post. My family got the Pay TV network First Choice (which eventually became TMN**) in 1985 and one of the first movies that I watched on it was this cheesy sci-fi flick starring a very young Molly Ringwald. Back then; the station only had a limited amount of movies on their schedule, which meant multiple journeys to The Forbidden Zone, if you know what I mean.

Okay, that’s all I got for 3-D, now onto the others. One of my most curious ‘acquisitions’ from my video store days is this little oddity. 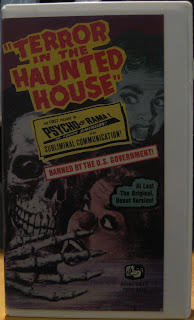 This is a 1958 movie that employs Psycho-Rama, a devilish form of subliminal messaging that flashes images during the movie to unhinge the viewer’s mind. Or, at least I THINK that was the intention. See for yourself.


The distributor even gets in on the action later, slating in “Rent Rhino Videos Every Day!” Hilarious stuff! 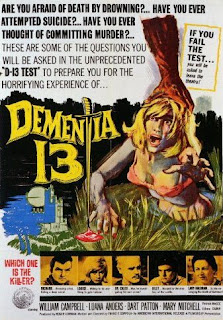 This 1963 Francis Ford Coppola flick (which may technically be the first body count picture) originally screened with something called the “D-13 Test”. It was a questionnaire that tested your sanity and if you failed you were asked to leave the theatre. I still, to this day, have not been able to find the full test anywhere; otherwise I would have posted it here.

Lastly, I cannot end this little piece without mentioning the king of ‘interactive cinema’ Bill Castle. He was one of the first to come up with ingenious ways to pull people into his movies. He loved his craft, but was also a great businessman who knew how to get people into the seats. For more info on this schlock icon, there is an upcoming documentary about him aptly titled Spine Tingler! The William Castle Story. Here are just some of the unique gimmicks he employed. 13 Ghosts used Illusion-O. At certain parts of the films, you looked through provided glasses to see the ghosts in the movie. The Tingler utilized Percept-O, where selected seats in the theatre were rigged with joy buzzers to ‘shock’ patrons during parts of the movie. House On Haunted Hill had Emerg-O, where a fake skeleton was flown over the audience during scenes where one appeared onscreen. And that’s just the beginning. Oh, what a delightful time to be a moviegoer, eh?
Well, that’s it for my post on the ol’ red and blue. Until next time, see you in the next dimension.


*-The Stewardesses actually came out in 1969, well before the eighties revival, but I wanted to work it in somehow.
**-TMN (The Movie Network) is the Canadian equivalent of HBO.
Posted by Jay Clarke at 7:23 AM