A Nice Ad For British Tourism

Well, I finally saw the British survivalist flick Eden Lake – one of the last on my list of ’08 festival titles – and here are my thoughts on it. 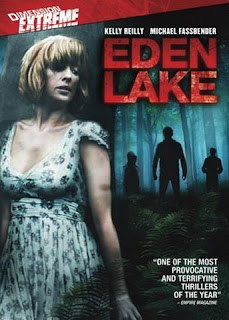 Steve and Jenny (Kelly Reilly & Michael Fassbender) have a romantic weekend planned out in the English countryside. Unfortunately for them, their getaway is crashed by a gang of unruly youths. When things turn ugly, the couple find themselves in a fight for the lives out in the middle of nowhere.

Even though it does everything well, I can’t help but feel that after France’s ownage of this subgenre over the past few years, that Eden Lake somewhat rings of convention. That isn’t meant as a negative comment, I just fear that because of this Eden Lake will have a hard time having its voice heard. That is precisely why it is the subject of this On The Shelf. The film is well acted, and even though it may seem that the protagonists went out looking for trouble, the story plays out in a relatively plausible way. As frightening as this concept is, it would appear – after hearing several stories from my relatives who live in the UK – that the chaotic behaviour exhibited by the antagonists in Eden Lake is as much a reflection as it is an exaggeration. Hooliganism is becoming an increasing problem and though I am not saying that a few bad apples ruin the whole bunch, it has become a harsh reality that whenever in a confrontation with similar groups of individuals, it is best just to leave it be. 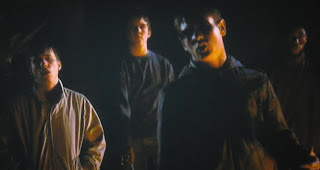 Anyway, back to Eden Lake. The city vs. country theme has been covered before, perhaps most memorably with classic American works like Deliverance and Straw Dogs, and Eden Lake treads on that same water. And like those perennial works, it is by no means a tame affair. It pulls no punches, wading into extremely dark material. I commend director James Watkins for going that route, because most of his contemporaries (the diabolical Simon Boyes & Adam Mason excluded, of course) like Chris Smith, Jake West and Edgar Wright do like to inject humour into their works. I love them all to be sure, but sometimes it is the bolder choice to leave the comedy at the door. Watkins takes the themes of unchecked human behaviour that he first touched on in his 2002 script for My Little Eye and expands on it here.

Eden Lake is worth a look, as I think it stands up well against its peers. Next up for Watkins, is the sequel to Neil Marshall’s horror 2006 powerhouse The Descent. After seeing Eden Lake, I’m feeling a little bit better about that now.

Remind anyone of hot fuzz? but still one of the best evil child movies in a long while throughly entertaining.