After shrugging off the bitter disappointment of the events Thursday night, I knocked off early from work and headed over to my local Cineplex to take in the new 3-D remake of My Bloody Valentine. Grabbing a pair of snazzy looking glasses from the bin, I sat down and waited for the spectacle to begin. 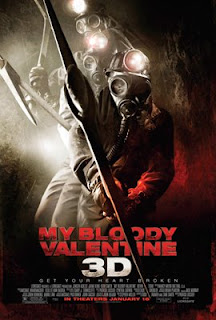 On the ten-year anniversary of the murders perpetrated by insane miner Harry Warden, the brutal killings begin again. Is Harry back from the dead, or has somebody else decided to finish what he started?

I’m glad to say that My Bloody Valentine 3-D delivers on what it promises. The 3-D effects are great fun and the technology is the best to date. Not only are there things coming out at you – the flashlight beams are an especially cool effect – but the whole picture appears raised, so things in the foreground actually look closer than those in the back. There is a slight problem with blurring sometimes, but at least the glasses don’t cause (at least me anyway) headaches. 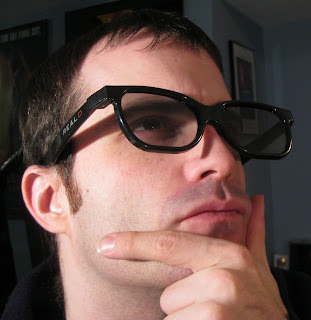 Not your father's 3-D glasses.

Aside from the 3-D, is the movie good? Well, not really. The script, with its Scooby-Doo ending, seems like it was written in an afternoon and the last few minutes are especially ridiculous. I will say though, that it gets right to it, so at least the movie knows what it is. It certainly tries to hearken back to those old slashers and sometimes it even succeeds. The thing to remember here is that I wouldn’t have touched this movie if it weren’t in 3-D anyway, so it’s really a moot point. On the plus side, Valentine doesn’t skimp on the gore and nudity. In addition to displaying countless uses for a pick-ax, the character Irene (played by Betsy Rue) runs around completely naked for like, five minutes. It was great to see genre actor Tom Atkins again, as well as the referential uncertified use of a washing machine. And, following her roles in The Tripper and They Wait, Jaime King seems to be getting really comfortable playing the role of Final Girl.

So, the question is, will the appeal of the 3-D gimmick get tiring after a while? Well, it hasn’t yet. I’ll be better equipped to answer that by the time the inevitable Valentine sequel rolls out. I’ll have seen Final Destination 4, the Piranha remake and Avatar by then, thus 3-D will be less of a novelty. For me, with home theaters being what they are now, 3-D is one of the few unique experiences that the multiplexes offer.

My Bloody Valentine 3-D is good popcorn entertainment, with lots of gags and gore. To be honest though, the whole experience just made me want to see the original again, which makes me even sadder about what happened on Thursday.
Posted by Jay Clarke at 6:11 PM